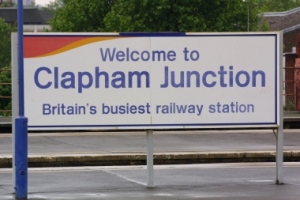 The government has just announced that Clapham Junction, with 9 other railway stations in England,  most in need of modernisation, are to get £50m to carry out urgent improvements.

But Chris Green (appointed by the government to look at the railway – former Virgin Trains chief executive) and Town and Country Planning Association president Sir Peter Hall – have identified 10 that are in need of the most urgent work and that they described as having been “left behind“.

Manchester Victoria was judged to be the worst followed by Clapham Junction and Crewe (customer satisfaction ratings), with all three suffering from overcrowding.

Transport Secretary Lord Andrew Adonis started a tour of all 10, visiting Clapham Junction this morning at 6.30am (argh, missed him! But hopefully Martin Linton, Battersea MP will have passed our message). According to the Daily Mail, he commented on Clapham Junction station and said:

”There is no obvious evidence of any investment or modernisation at Clapham Junction for 30 years apart from the installation of some new lifts.

One of Europe’s busiest stations, it doesn’t have a single escalator, the platform canopies cover only a minority of the congested platforms.

There is virtually no waiting area and no bike parking that I could see.

The station badly needs a new entrance which links into the overpass, relieving pressure on the congested tunnel linking the platforms, and this is now proposed.

Local controversy has focused on the extent of commercial development around the station needed to generate the income for the station upgrading.

Network Rail now intends to come forward with a revised scheme to bring about early improvements.“

You can read more comments on his tour on the Timesonline website.

He said earlier, commenting on the report from the government’s railway “champions”:

“I support the report’s recommendations of minimum standards for stations – classed by size – in terms of information, car and bike parking, facilities and environment.

I intend to make these minimum standards a requirement in future rail franchise agreements with train operating companies.“

He also added that rail operators would be required to ensure minimum standards in future.

It is good news for Clapham Junction, at the time where we have just launched an initiative to debate on the redevelopment of the station.

With Martin Linton, we met yesterday with Office of Rail Regulation senior officers. We presented our vision of an improved station and urged the regulators to give the Clapham Junction upgrade high priority for in the next funding round (CP5 – 2014-2019). We will have more to say on the meeting and future actions in a next report but you can already read some of  Martin Linton’s comment (see his website HERE):

“The Government is already installing lifts and building a tube station at Clapham Junction, but it’s still a very overcrowded, old-fashioned station that is in urgent need of better facilities for travellers.

The new entrance opening soon at the top of St John’s Hill will give direct access to the lifts and this will be a huge bonus for the public as well as for people with wheelchairs, buggies, bikes or heavy luggage. But my top priority is to give access to the lifts from the Grant Road side of the station as well.

Together with the Clapham Junction Action Group I will also press for a bigger main entrance with more ticketing facilities and with escalators from the concourse to the overbridge to relieve overcrowding in the tunnel.

We’ve expanded the capacity of Clapham Junction from four-carriage to eight- and ten- and eventually to twelve-carriage trains, and we need more entrances and facilities and escalators to ease congestion and to make travelling a more pleasant experience.

I know that all the people who objected to the 42-storey towers were still keen to get the station improvements and I’m delighted that the Government has come forward with some funds to pay for the most urgently needed improvements.

There’s no reason why we should have to pay for urgently-needed station improvements by agreeing to giant tower blocks which would be totally out of place and I’m glad we didn’t agree to the scheme.

In the longer run we will need even more investment to turn Clapham Junction into a first-class station. It is already Britain’s busiest station with 40 million passengers going through the station every year, but it has the entrance and facilities of a small town station.”

It is exciting to see that things are moving, and fast. We hope to be able to meet with Network Rail as soon as possible to discuss on the new possibilities.

UPDATE 19/11/2009: I am a bit surprised by the press release from the Council (or do you call that “politics“?).  Guy Senior, Wandsworth Council’s transportation spokesman, said:

“All the Government is offering is a lick of paint.“

£5m or more is expensive for paint, and I wonder then how you could call the £300k that WBC put aside to help improve the new station entrance: a droplet?

Seriously, why not simply say, as we press for, that this funding is welcomed, and we hope that it shows concerns at the government level and that it will be followed by additional funding to eventually make a proper redevelopment?