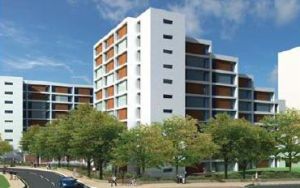 As published in October 2009, the Council approved the redevelopment of the site along Grant Road (Griffon House  & Lanner House 6 Grant Road SW11) involving demolition of existing buildings and construction of new building between 6-11 storeys to provide 452 self-contained studio rooms for use as student accommodation (for use of post-graduate students of Imperial College London) together with associated car and cycle parking, landscape treatment, amenity space, access and servicing facilities.

Residents have expressed concerns on the disruption caused by vehicles using the public pavements for parking and accessing the construction site.

John Marshall, one of the local resident, has written to Wandsworth Council claiming that Berkeley First contractors are denying pedestrian access by parking vehicles on the pavement and opening the gates outward, completely blocking the pavement. He highlighted 4 contraventions to the special conditions attached to the licence to the site and provided photographs (as shown below): 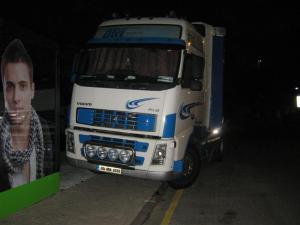 He asked for the work to be suspended until agreement is found to prevent re-occurrence.

The Council officers responded that they were contacting Berkeley First to get as many issues addressed as soon as possible and try to reduce the negative impact the current works are having on the surrounding area. They also confirmed that the costs of repairing any damage caused will be relayed back to them. However there is no sign that any measure was taken to enforce health and safety requirement.

The old children’s house to be included within the development

The location of the old Children’s home site (50 Winstanley road) has been sold by Wandsworth Borough Council to Berkeley First (report January 2010) (in orange colour in the photos below).

The planning application database being currently unavailable, I was not able to retrieve more information and little is known about the use that Berkeley First wants to do with the new site.

You might remember that the current permission raised questions about the density and size of the buildings (with the provision of 452 studio flats). Any building extension would reinforce the same arguments; but the additional space could also be used by the developers to increase the public space and thus lower the density of the scheme.

Feel free to post in the comments if you know more.

if we can get as many issues addressed as soon as possible and try to reduce the negative impact the current works are having on the surrounding area, and will request that as well as responding to this department, they also respond to you acknowledging your complaints and hopefully giving you reassurances that these problems will cease.

From the points that have been raised in both you email and telephone call from today, and your previous contact with Paul Foster of our Environmental Services team – I received a copy of this email chain yesterday, the 20th of July. The main issues that this department will be looking into are the gates of the site entrance opening outwards onto the public highway and causing a potential obstruction to the footpath outside the site, and the removal of the parking post as this may have created a potential trip hazard on the footway and will also be required to be replaced. I will raise the issue of the HGV’s parking on the footway, this office cannot undertake any enforcement action on this matter as this falls under the parking departments remit, they have been made aware of these issues and will take the appropriate enforcement action where necessary, we will however make it very clear to Berkeley First and their contractors that they may be causing damage to our footway and possibly apparatus belonging to the various public utilities which is located below our footway, and that the costs of repairing any damage caused will be relayed back to them.