While government funding for Clapham Junction’s upgrade scheme was scrapped last month, the Transport Minister helped lay the foundations of London’s next major transport hub in a visit to… Farringdon station on July, 15th (budget voted by parliament in 2006).

According to the Department for Transport, the plan is for upwards of 140 trains per hour to flow through Farringdon as north/south Thameslink, east/west Crossrail and London Underground services all meet at the new station, from 2017.

This would see Farringdon surpass Clapham Junction as Britain’s busiest train [interchange] station and bring passengers from outer London closer to the City and Canary Wharf.

Farringdon will be the only station from which passengers will be able to access Crossrail, Thameslink and London Underground trains. It will provide links to Gatwick, Luton, Heathrow and London City airports in addition to St Pancras International rail station.

“This important work at Farringdon will see the station transformed into a 21st century transport hub, fit for the needs of a flourishing London.

With the completion of the Crossrail and Thameslink programmes, passengers can look forward to better, faster journeys from a station set to become the busiest in Britain. Under those plans, the fully redeveloped station will act as an elegant gateway to London, Britain and the continent. And Farringdon’s patient Thameslink passengers are expected to start to reap the benefits of a much-improved station from as early as Christmas next year.”

We have been advocating all along that Clapham Junction station is Network Rail’s responsibility and as such concourses should be primarily developed by the rail operator, not a private investor looking for huge luxury residential skyscrapers as part of a deal.

Guess what? Farrington new station and ticket hall is being constructed by Network Rail and the Minister’s visit marks the start of work on the hall’s foundations!

“The Farringdon station redevelopment is based on a clear organisational diagram, and visualisations of the interior of the ticket hall show a generous space with high levels of natural light. The drawings and visualisations promise a station that will lift the spirits of commuters and visitors to London using the Thameslink and Crossrail services at Farringdon.”

“In less than 18 months time passengers at Farringdon will benefit from this new ticket hall, vastly improving access to the station and helping transform it into one of London’s most important transport hubs.

London relies on rail to get hundreds of thousands of people to work each day, so I’m pleased to say our work at Farringdon is on time and on budget.” 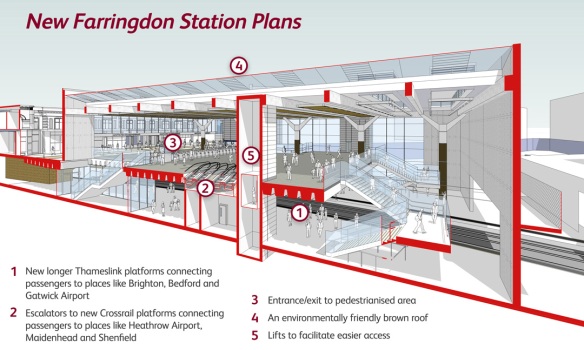 It will also be fully accessible for people with pushchairs, heavy luggage or disabilities.

The cost of the redevelopment is currently £250m, all funded by government money (~£200 coming from Thameslink project and ~£50m contribution from Crossrail funding, there is no private investment). Atkins has been appointed by Network Rail as the designer for the Thameslink elements of the works (to accommodate longer trains and increase passenger throughput) and, since London Underground own the station, they were commissioned to provide concept and design for the associated station entrances, as well as the respective concourses and platforms. Additionally, Atkins is the concept and detailed designer for the integrated ticket hall, which will not only be the main access for Thameslink services but will also become the main entrance for Crossrail. NR has appointed a joint venture of Costain and Laing O’Rourke to carry the work.

The Thameslink idea started in the 80’s but the £5.5bn funding was eventually approved by parliament in 2006 only. Several consultations occurred all along the project and planning permission was required for redeveloping the station itself (granted through the normal Council’s process in 2009).

Investment at Farringdon station was made absolutely necessary with the projected passengers using the station to triple when the two projects will be finished. Although traffic at Clapham Junction is not meant to triple within the next 2 years (thanks god!), projection from Office of Rail Regulation is already showing a 25% growth within the next 15 years with the current service.

In addition, a number of projects will bring additional passengers with:

All together, the number of passengers in Clapham Junction could increase by 50% within 15 years. And decision for funding for the period will be made in the coming years.

It is clear that the main difference between Clapham Junction and Farringdon Station – beside the additional flow of passengers – is that the second project was much more advanced and commitments and deadlines already set as part of a biggest and major government project.

On the other hand the failure to achieve any redevelopment for Clapham Junction in the past decade, along with the lack of vision for any long term commitment can just become more exasperated with passengers and services increasing.

But other questions still stand: why is CJ denied any serious thought for a new station/concourse? Why is government money withdrawn for any redevelopment of CJ while it as been widely assessed that it should be a priority?

When Theresa Villiers visited the station in the run up to the election campaign, we welcomed her announcement that a new Conservative administration would make Network Rail more accountable to passengers. With the new spending review period now close upon us (CP5: 2014-2019: decision 2011/12), we hope very much that those objectives will become a reality.

The Clapham Junction Action Group is committed to work with residents, political parties, businesses and all stakeholders to provide ideas for the redevelopment of the station. You can participate here (click).

When Theresa Villiers visited the station in the run up to the election campaign, we welcomed her announcement that a new Conservative administration would make Network Rail more accountable to passengers. With the new spending review period now close upon us, we hope very much that those objectives will become a reality.