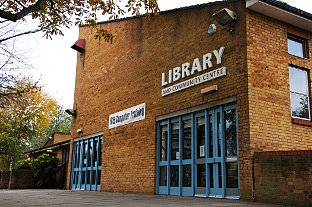 There is only one word I can use to define the idea of the Council to close York Garden’s library: shame!

The Council knows that the library service is already not magnificent in the borough albeit being a community focal point and a very important service, especially for people with limited transport or mobility.

The report presented before the Culture Committee acknowledged that

In addition, a recent survey confirmed that the library comes at the highest from all other part of the borough for children thinking it helps them to be better at school.

The case to close the library

The current argument laid down by the Council, to justify the closure of the library, is that York Gardens is the borough’s least used small library for book lending and the most expensive to run in terms of net cost per visit. However it does not consider the other services such as: community focal point, IT facility, children usage…etc.

The second argument that is it within close distance from Northcote road library made me laugh. I was wondering who in the Council invented that idea? For a matter of interest I walked from the Northcote road library to the York Gardens’ one. It took me more than 30 minutes, crossing 2 extremely busy road: Falcon Road and Lavender Hill (same argument for the Battersea library actually, albeit closer). I wonder who, knowing the road-free location of the York library, will dare using this argument to explain that children would easily go to another library! [4]

According to the report by the Director of Leisure and Amenity Services, the Council would save £219,000 per year by closing the library.

But in view of the recent outcry to scrap all community services from the ward, they suggest:

On the other hand, the council could save £53,000 per year just by reducing the opening hours [2]

Therefore the difference between closing the library and reducing the opening hours is just £74,000 per year.

This amount is equal to an increase Council Tax of less than 59 pence extra per year for a Band D property (and that’s before any Housing Benefit is taken into account). [3] Just remember that the inflation (RPI) was 8% over the last 3 years, while the increase of Council Tax was 0%, which means a decrease in real cost since 2008 (~£30).

It represents also only a share of the money brought by the CCTV camera No 225 in Grant Road (just a few yards away from the library!) which was “honoured” last month in the Sunday Times (magazine) as issuing more than 6000 tickets in a year and earning £300,000 for Wandsworth Council!

Wandsworth-based historian Sean Creighton has written a detailed analysis of the York Gardens Library situation (full document here) where he concludes that: “The possible closure of York Gardens Library is a targeted and disproportionate assault on an area of high social deprivation” and the real reason is “the fact that the building can help the Council resolve other service issues“.

A public meeting was organised at the York Park library by the Latchmere cou﻿ncillo﻿rs﻿ (Labour) in the 2 December 2010.

Wandsworth council has acknowledged the receipt of more than 1,000 signatures on petitions that oppose the closure of York Garden Library.

The campaign against the closure has set up a website where you can find other information and actions: http://saveyorkgardens.com

It includes a documentary from Channel 4 News showing that the number of people living in poverty in Britain is set to rise by almost a million by 2014 and displaying Latchmere ward as a deprived area, threaten to be hit even harder by the closure of the York Gardens Library (view HERE).

The first meeting officially organised by the Council was at York Gardens library Thursday 9 December between 2.30pm and 4.30pm (yes, good idea in the middle of the working day!).

A second meeting will take place at York Gardens on January 10 between 6.30pm and 8.30pm. Details of the times and venues of all the other meetings are available at www.wandsworth.gov.uk/libraries.

What Can YOU Do?

Even if you do not live in the ward, and do not use the library service, you should feel concerned by this idea and shout to the Council: shame on you for considering such plan!

[1] Closing only York Gardens library would generate an annual saving of £219,000 or £127,000 if the children’s library and I.T. tutor elements were retained. – page 2 of the report by the Director of Leisure and Amenity Services on a review of library provision in the Borough and resultant options for savings.

[2] Library Reduced Opening Hours; proposals for reducing opening hours across the Library service as outlined in paragraph 37 would save £462,000 in 2011/12 and £616,000 in a full year (reduced to £422,000 in 2011/12 and £563,000 in a full year if York Gardens library closed rather than be subject to reduced hours – page 2 of the report by the Director of Leisure and Amenity Services on a review of library provision in the Borough and resultant options for savings.

[4] And I am not even quoting Jane Ellison, Conservative MP for Battersea, who explained that the best way to cope with the situation was for everyone (every volunteer?) to work together to replace the service (free of charge – that’s the Conservatives Big Society!). In other words, please understand that if you could lend you books to others for free, there is no need of a “costly” library service! (I give another idea: if everyone could do a rota to clean/repair the streets themselves, the Council could save also a lot of money…etc – yes it is called community service)