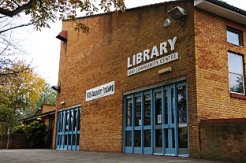 The Council has been determined to reduce the library services and to pursue with its plan to shut down services at York Garden Library to save money.

However, the simple close of all services provided in the deprived area faced a strong outcry from local residents and deep concerns in other part of the borough. We were not the biggest voice against the targeting of this public service, but we published our opinion with an explicit title: Hall of shame.

During the meeting organised last December, Jane Ellison, Battersea MP, paved the way to the “exit-solution”, using the PR friendly idea set up by Conservatives spin-doctors: the “Big-Society” stuff (even on Conservatives websites they put quotes as nobody knows what it means exactly…).

It was confirmed on her website later as she wrote:

A proposal was indeed presented before the Environment, Culture and Community Safety Overview and Scrutiny Committee on Monday, 28th February, 2011 and approved (by 6 votes to 0 with 2 abstentions from Labour Councillors).

The report from the Director of Leisure and Amenity Services on the Library Review, following public and stakeholder consultation, proposes:

The result of the consultation on the future of the library service in Wandsworth showed that 1,201 Survey Forms had been submitted. 205 short surveys had also been created by the Save York Gardens Library Campaign. Stakeholders have also submitted Library Review Survey Forms on behalf of their organisations or communicated their views at meetings or via letter and email. A total of 184 letters and emails, including 12 from community or stakeholder organisations were also received by the Council.

Regarding specifically the York Garden library questionnaire, the analysis indicated that (from page 10):

In its report the Director agreed with most of the point raised by opponents of the closure. He wrote, for example, that “retaining some form of children’s library provision could be considered since, although alternative provision at Battersea Library is little more than half a mile away, it is recognised that access for families and children would be more challenging.”

The report also highlighted that Thomas’s Schools Foundation has expressed concerns on deprived elements of the community in the Battersea area. During a discussion with the Council representatives the Foundation expressed interest in offering support to, for example, maintaining a children’s library and homework club presence on the site of the York library (thus the “Big Society” aspiration).

Another opportunity could be to claim government’s support (meaning also funding!) to develop the idea of “Big Society” within public services’ staff who want to take over and run their services as mutual organisations (don’t ask me what it means exactly – not a clue ; public sector workers to volunteer to do the same work but unpaid?).

But, although trying to please Conservative aspiration, the Director is not naive and wrote (as a warning?) in its report:

“During 2009/10, the Service had 90 volunteers working in libraries, 50 were new and 40 continued from the previous year, representing a turnover of 55%. Experience suggests that, after initial enthusiasm, volunteer fatigue will develop and increased efforts will be required on a continual basis to maintain the pool of volunteers across the Borough. Some volunteers are out of work who then give up volunteering when they find employment. If Option 4 is approved, officers will look to establish the feasibility of recruiting suitable volunteers, in appropriate numbers, to develop a strategy for using paid staff and volunteers to maintain extended opening times.“

His report is however supportive of the option above, giving 2 reasons:

The savings target to be achieved could be the £127,000 saving of retaining some services vs closing fully, plus the saving of a full-time Senior Library Assistant of £28,915 per annum that were part of the Children’s Outreach service. This gives a total saving of £155,915 per annum.

However we can read further on that the pilot will only achieve the £155,900 saving if community lettings income and the partnerships with Thames Christian College and Thomas’s Schools Foundation are maintained. Should this not be the case then some of the operating costs may revert to the Council. The costs for converting the Library for use under the pilot are presently estimated to be £50,000 and will be contained within approved revenue budgets.

The consequences for the York Gardens library users

The decision is on a trial 12 months’ basis, consisting of use of the York Gardens building for:

[1] There is a statutory duty to provide a ‘comprehensive and efficient public library service for all persons to make use thereof’: Section 7, Public Libraries and Museums Act 1964.