Following the consultation on the Proposed Submission versions of the DMPD (Development Management Policies Document) and SSAD (Site Specific Allocation Document), which provide detailed policies to support the delivery of the Core Strategy [1], the Council officers have spent the beginning of the year working hard on analysing and commenting the 73 responses in total, made of 497 comments on the DMPD and 496 comments on the SSAD. Following the schedule they gave, they have presented their responses before the Committee this April.

First of all, and before any comment and disagreement we might write further down, we must admit that the Consultation report is fully detailed and – at least in the case of CJAG that we know – addressing all the comments that were made with details and proper responses.

We won’t go through the 144 pages of the report (you can download the PDF) but I will comment the direct responses to the concerns raised by CJAG (and where cited) and highlight in bold the key decisions.

page 5: A letter was sent to the Putney, Wandsworth, Battersea and Balham Socities, Clapham Junction Action Group and the Tooting Local History Group offering to meet with the groups and explain the DMPD and SSAD documents and process related to the consultation. Clapham Junction Action Group chose to send in a series of questions for the planning service to respond to, rather than attend a meeting.

You can read the outcome here.

DMS1a: we questioned the definition of the potential of site (financial? density?). This policy criterion has been retained but  further clarification has been provided in the context (para 2.3) to clarify that this needs to be appropriate to the local context and take into account the London Plan density matrix.

DMS1d: We questioned the removal of the “need to justify and mitigate any impact“. The officers acknowledged that the policy lacks the need to justify impacts where they do occur, but it is considered that only having to justify impacts, rather than seek to reduce them, does not go far enough either. Therefore, the Council has amended DMS1d to require any impacts on natural features, open spaces and strategic views to be avoided, remedied or mitigated. They submitted this amendment and required our feedback ; we supported the change.

p12: Tall Buildings: Clapham Junction Action Group request reference in this policy clause that the visual representations must accurately represent what would be seen by the human eye. This is accepted, but is considered more appropriate to be within the context to the policy.

After the Ram Brewery Inquiry, the Inspector wrote: “the use of a wide angle lens has the effect of distorting perspective and distance, and thus the spatial relationship between foreground and background. Existing buildings, and therefore the new ones, appear further away or smaller than they are or would be in reality. This was particularly apparent to me when I compared the AVRs to the actual views from the same viewpoints and is also demonstrated in the Wandsworth Society’s comparable 40º AVRs”. We are pleased that the Council officers are acknowledging our point and accept the consideration.

p13: Clapham Junction Action Group  question why the requirement to respond positively to any characteristic alignment and setback of surrounding buildings was removed between Preferred Options and Proposed DMPD & SSAD Proposed Submission Statement of Consultation Submission stage. It is accepted that this was an important part of the policy that should have been retained, and has been reinstated in the Submission version.

p14: The Stage 2 Urban Design Study describes storeys as an average of 3m. […] The 3m assumption has now been referenced in the context to DMS4, along with a requirement for planning applications to express the height of their buildings in storeys and metres. Clarification has also been provided that the ground floor is counted as a storey.

p83: In relation to building heights, CJAG queried why heights are expressed in storeys rather than metres. The Council responded that […] this assumes an average storey height of 3m […]. This has now been included in the context to DMS4 for clarity, along with a requirement for developers to express their building heights in storeys as well as metres in planning applications

p54: The Clapham Junction town centre boundary change is supported by the Clapham Junction Town Centre Partnership, but opposed by the Wandsworth Society on the basis that this has been done to allow tall buildings in this location. The change has been made to encourage integration of the site into the town centre, by allowing town centre uses along the St John’s Hill frontage. The site has been identified as ‘sensitive’ to tall buildings, with buildings being considered tall at 5 storeys and above.

As far as we know it is also contested by the Putney Society. The fact that the Council cannot ignore is that Peabody Trust is working on the possible redevelopment of the estate, including knocking down the existing buildings and replacing them by high density constructions including a 21-storey tower, along with a 13-storey and 10-storey buildings.

The re-wording seems an attempt to address the arguments raised by developers to ease their planning: in the new version, their taller buildings will be located in the sensitive but no longer inappropriate location! It is noticeable that the paragraph does not mention anymore the Core Strategy IS3 talking about the impact on the surrounding area. Located at the top of the hill, a 11 storey building will appear to be about 28 storeys when viewed from Arding and Hobbs and will nearly double the size of the estate in Grant Road.

Therefore we consider the boundary change in the DMPD to be an attempt to justify the inclusion of part of the estate in the “sensitive but not inappropriate to tall building” area for town centres, rather than the promotion of the St John’s Hill frontage.

As the council officers do not see the difference between “sensitive” and “inappropriate” this is definitely an issue that we will seek to resolve before the inspector. In a previous hearing, the inspector already rejected the argument made by the Council that the Peabody site is appropriate for tall buildings because of its high PTAL (page 33 of the DMPD and SSAD preferred options statement of consultation) and is likely to see the boundary dispute as an attempt to bypass her previous decision.

p85: CJAG and Oak Trading Ltd consider that reference to the realignment of Falcon Lane has not considered feasibility and that costs and the impact of reducing the size of the  ASDA/Boots/Lidl site on the deliverability of development have not been considered.[…] There has been no cost consideration applied to this approach and the intention is to flag up a potential improvement. The Council currently has no plans to realign the road. If a developer were to come forward it would be for them to undertake the necessary assessments of viability in the first instance. It is unclear as to the likelihood of such a scheme coming forward in the next 15 years with the existing economic uncertainties, however it is possible that one of the sites may come forward for development, and identification of the SSAD for a potential wider redevelopment is considered worthwhile.

At least it has the merit of clarity: it is just a wishful idea, with no serious thought whatsoever.

p85: Representations on Lanner and Griffon House were received from Clapham
Junction Action Group, Battersea Society and St James Group. As construction has
started on the site for student accommodation (2009/2279) it has been removed from
the Site Specific Allocations Document.

That is what we said, considering that the whole area is currently under construction with 3 buildings/high density up to 11 storeys and therefore Lanner and Griffon Houses do no longer exist as such.

p86: CJAG want the Car park adjacent to Sendall Court, Grant Road to be allocated entirely for public open space, in view of the consented developments at Lanner and Griffon House. This is not accepted as the site is not within an area of open space deficiency and is within 300m of York Gardens. Allocation of the site entirely for open space would therefore not be a priority use of the site.

It is indeed close to a public space. However, considering that it is separated by buildings up to 11 storeys exceeding the 5-6 storeys that the Council recommends in its policy documents, the open public space should balance that impact.

As we were talking above about the necessity of appropriate visual representation we must consider the images that were submitted. In order to get approval, the developers of the site of Lanner and Griffon House submitted a documentation showing illustration with wide public spaces around their tall buildings. If it was showing that the Car park adjacent to Sendall Court could see another building increasing the already high density of the area, the public view and final decision of the committee might have changed.

As we cannot consider that the Council approved the consultation and the planning proposal based on visual representation that it knew being inaccurate, we think that the Council should consider the space adjacent to Sendall Court, Grant Road with the greatest circumspection.

In order to help visualise the impact, I presented the photos showed by the Developer (taken from its website) against a very quick montage assuming the impact of new constructions as it could happen in the space argued. Aren’t things less “appealing”? 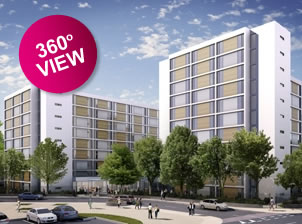 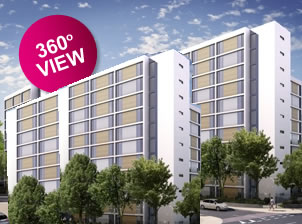 p86: CJAG acknowledge the mention of the Clapham Junction Station Approach site being sensitive to tall buildings and agree that the site provides a real opportunity to provide the type of retail unit suited to larger chain stores, however CJAG consider that the issue of circulation between the two sides of the railway still needs to be addressed. The Council acknowledge that this is a key issue facing Clapham Junction. […] CJAG also consider that the ‘Land at Clapham Junction Station site’ should be allocated for mixed use development. As the site is outside the town centre it is more appropriately allocated for high density housing development.

Outside the town centre? Clapham Junction station? Indeed if you read the artificial limits following existing developments. As the officers wrote (p85) “the Council considers that the relatively narrow site located between the railway lines is currently inaccessible and there are a number of obstacles to its development“. Any redevelopment of the Station Approach site will affect the station itself and therefore the town centre in general. It is currently a train depot and a business use could be retained.

[1] The Clapham Junction Action Group has submitted a contribution that you can read HERE along with additional questions and comments THERE.