The article below was published in the Architects’ Journal on May 11th, 2012 (I put my comment in red). 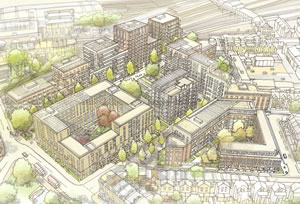 Hawkins\Brown has submitted a planning application for the £120 million revamp of a Peabody housing estate in Clapham Junction, London

The project for Peabody features 527 apartments with just over half affordable. The scheme also includes a 530m² community ‘hub’ featuring a café, club room, crèche and function rooms.

Hawkins\Brown’s original plans for the site were first unveiled in 2009 but have since been revised.

The new scheme includes buildings of between four and 12 storeys and 13,600m² of public space. An on-site District Heating System and CHP unit is planned, with residential units expected to achieve Code for Sustainable Homes Level 4.

A series of 5-storey 1930s residential blocks and a community centre on the site would be demolished to make way for the scheme.

Peabody’s project leader, Richard Stanway-Williams, said: ‘These plans will help us realise our 21st Century Peabody vision which is to integrate developments into the wider community.

‘This is best expressed in the creatively designed open spaces including a square, and amenities such as a community centre.

‘Since late 2007, we have spent a considerable amount of time discussing the redevelopment of the estate with residents, along with local stakeholders and the wider community. The Residents’ Steering Group plays an important role in representing the views of residents and will continue to do so through to completion.’

Indigo Planning managing director Phil Villars said: ‘These plans will offer Peabody’s residents a higher standard of living in larger and more sustainable homes, making more efficient use of a site that already benefits from being very close to a major transport hub and the centre of Clapham Junction.’

However Cyril Richert of the Clapham Junciton Action Group said the scheme was ‘too dense and too tall’.

In a letter sent to local authority Wandsworth Council objecting to the scheme, he said: ‘History and experience suggest that multi-storey blocks, which are significantly out of kilter with the rest of Clapham Junction, will simply become the new normal.’

“I hate to agree with a local politician, but this scheme is too dense. Compare the previous scheme from 2009 and this is obviously a poorer quality proposal. No articulation, no variation, just massive heavy slabs filling every space to the edges.”

Er, is the comment describing me as a “politician”? 😀 Anyway, glad we we have the same view…