According to an article published in the Architects’ Journal, Hawkins\Brown (Peabody’s Architects), AHMM, BDP, Terry Farrell and Wilkinson Eyre have been shortlisted to look at resurrecting the multi-million pound redevelopment of Clapham Junction in south-west London. Apparently, Collado Collins, the architect of the previous scheme, is not taking part.

Three years after it was forced to withdraw a controversial £400 million twin towers scheme, the Land Securities and Delancey-owned joint venture has decided to select the five practices to look at redeveloping the Clapham Junction train station shopping centre with a view to appointing one to carry out a feasibility study. They said:

“The Metro Shopping Fund can confirm that it has spoken to a group of architects with a view to one of them being appointed to carry out a study to assess the feasibility of development at Clapham Junction station. This process is at a very early stage and should in no way be seen as an indication that the Fund will be undertaking development at the station either now or in the future.“ 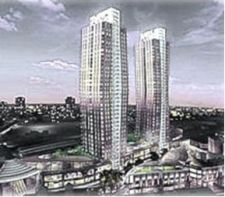 MSF has not contacted the Clapham Junction Action Group at any time. However they should be well aware of our view as we published a full study with ideas and proposals on this website last year. And they should also remember the overwhelming reaction caused by their previous proposal and the way it ended.

As reported by the Architects’ Journal, the Council said:

‘A private development scheme could help to solve some of the underlying problems and we would expect the plans to complement the town centre environment.’

There is absolutely no doubt that all eyes will be watching the fate of the plan presented by Peabody, to see what direction to take for the station. After all, Hawkins\Brown, one of the architect selected, did not see any controversy in proposing a 21 storey towers for the Peabody site at the top of St John’s Hill 2 years ago.

If Peabody’s proposal is approved as it stands currently with 12-10 tower blocks and 60% higher density, we can expect 15, 20 or even bigger towers for the station with the imagination of architects (42 storeys did not appear out of place for the developers!) and a little Croydon on its way for Clapham Junction.