Did you know that we might celebrate our 40th birthday this year? I did not know either. Actually we are not, but I received this document (below) which shows a leaflet from the (Clapham) Junction Action Group in 1973. 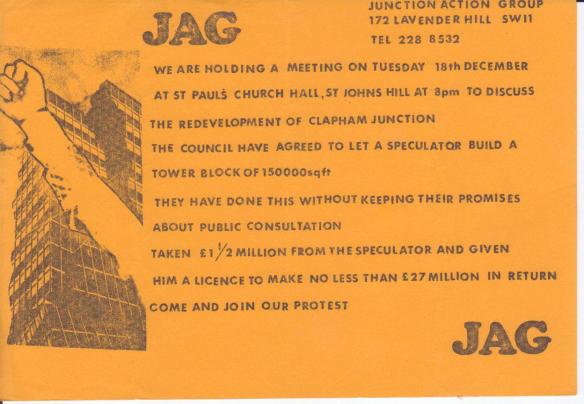 Apparently our “ancestor” was already at odd with the Council claiming WBC agreed to let a speculator build a tower block (yet!) without keeping their promises about public consultation (yet!); a Labour Council until 1978, with Cllr Ian McGarry as leader of the Council (and Tony Belton acting as Chair of the Planning Committee).

The protest was organised against the Merbridge Investment scheme for the Clapham Junction station site!

Although the developers were planning a 25 storey tower block, the Council never approved it at that time. The Labour Council granted permission only for what is now the Station Approach and all that surrounds it (Asda came after 1978, under the Tory lead) as confirmed by Tony Belton. He added: “At about that time there was consideration of building all over the top of the station – a massive site if you think of all the tracks being decked over, etc., but no one had that kind of money!”

At that time, campaigning was tough, as proven by the image below!

Do you remember this time? Can you tell us more?