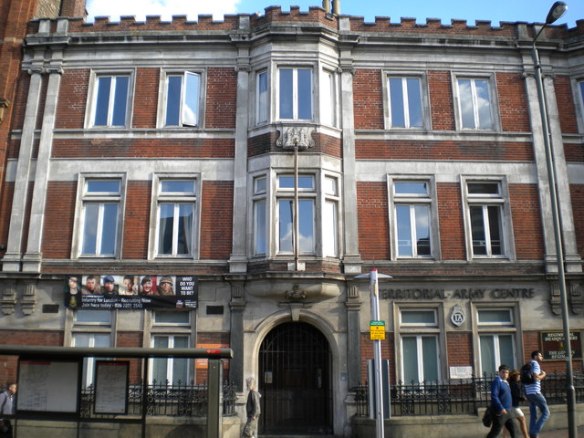 On July, 3rd it was confirmed that St John’s Hill barracks (Territorial Army) will close (rationality, said the Secretary of States). That’s part of the global reshuffle that sees the Army Reserve replacing the Territorial Army brand.

The rumour was already spreading during the Peabody development plans that the TA site would become the next spot open to redevelopment.

However, in the latest planning documents for Clapham Junction published by the Council, there is not a word on the site. In our submission, we have therefore commented:

In view of the recent consent for the redevelopment of the Peabody estate, and as consideration was made during the Peabody planning application about the future of the Territorial Army site, we think that a section should be dedicated to provide guidelines for future development.

The Territorial Army premises sit between the listed Grand Theatre (equivalent to 4 storeys) and the Peabody Estate (soon to be up to 12 storeys). To comply with Core Strategy Policies IS3d and IS3e, any application here would need, amongst other things, the “preserve” and “enhance” the surrounding area’s character, and its massing and scale would have to be “well integrated into the surrounding development”.

It should specifically highlight

– conservation of historic part of the site (including frontage)

– tall building will be inappropriate in this location and heights should match at maximum those of the current building fronting St John’s Hill up to the junction.

And you, what do you think of the future of the site?

UPDATE 6/04/2017: In July 2013, the then Defence Secretary Philip Hammond announced the Territorial Army St John’s Hill TAC, Battersea would closd with 35 others, as part of a reorganisation. Three years later a lot have changed and it looks like things have stalled. At the same time Peabody have decided to put a temporary hold on their next door development, aiming at resubmitting a revised planning application (more to come soon…).