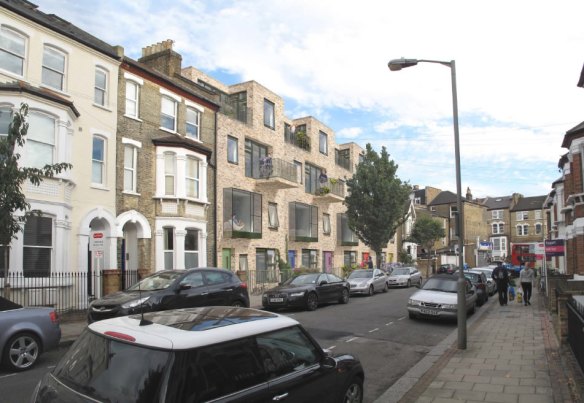 A scheme proposing to replace a few 3 storey small residential blocks in the style of former council houses, with a modern 4 storey building has been approved two weeks ago by Wandsworth Council.

In the summer of 2012, the existing residents of 4-8 Hafer Road bought the freehold of their building from Wandsworth council for under £40,000 and formed a company which 7 of the resident owners are directors. They approached developers to design a new building with 21st century architecture and facilities, and that would allow them to sell additional units from the new block to clear all remaining debt of the residents and make the developer a +20% profit.

The architects hired to design the new building are well known for utilising maximum space to achieve maximum living space with no regard for green space or local character. The design submitted to Wandsworth Planning Committee is the following:

Strong objection from the neighbourhood and amenity groups

The Clapham Junction Action Group objected to the development saying:

“The total footprint of the construction will be more than 3 times as much as the current dwellings. As a consequence it will be very imposing and with a quite different style to the Victorian terrace houses that characterize the rest of the area.”

They also strongly supported the objection of the Battersea Society which said that “the design of the frontage remains out of keeping with its neighbours with obtrusive balconies in particular introducing a jarring note“.

The Clapham Junction Action Group and the Battersea Society were supported by about 40 households in the direct vicinity who also objected to the new design.

Local residents pointed out that there was no reference to the lack of an independent parking survey from the Applicant. There will be a massive impact on parking from the extra households/residents on such a small street exacerbated by the rack of Boris Bikes planned on an adjacent road.

Another issue was the lack of independent Light Assessment (one resident at 10 Hafer road claimed that the assessment submitted on behalf of the Applicants sanctions a 40% loss of light in their kitchen!).

“The Company of Architects used are based in Kings Cross and their plans are for a high density build far more suitable to an inner urban area where space is less valued or available.“

Almost 40 local households wrote objections to the design on the Council’s Planning Application website. There were 30 comments in support, with many of them from Clapham South.

The Council’s communication of the process of the application, how to object, make comments, and the process of decision making has been pathetic, with many residents being left in the dark about the situation and even when the planning committee meeting was or how to get local council to support their concerns.

An article in the Wandsworth Guardian described the huge disappointment of the neighbours:

“Neighbours said they were left disappointed after their ward councillors declined to speak on their behalf during the committee meeting.

Requests were sent to Councillor Peter Dawson, Councillor Jenny Browne and Councillor Martin Johnson for help but the councillors said all they would do is pass on their emails to the committee members.

The councillors defended their actions pointing out ward members can only give short statements at meetings, are unable to participate in discussions and cannot vote.“

During the meeting, four councillors asked questions and agreed that the development was oversized. Cllr Belton (Labour) thought that the ‘castellated’ design might break up the acknowledged mass density of the build. They did not consider how a flat, squared (rather than pitched ) roof at increased height would further add to the mass imposition of the structure.

At the end, only Cllr Heaster (Conservatives) voted against the proposal.

There were 3 council officers who were supporting their report but they couldn’t provide any photos or models; they didn’t even have the correct number to hand on how much bigger the development is.

Post meeting, those residents who are opposed to the design are pursuing other angles of action including obtaining legal advice.