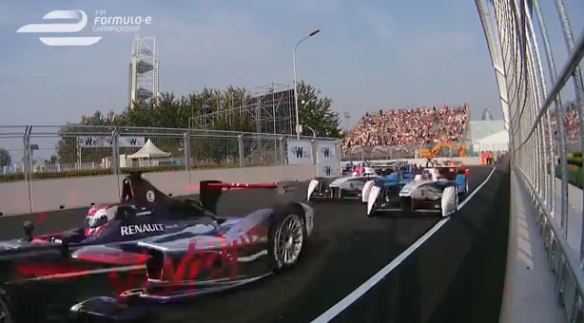 Wandsworth Council is proposing to use Battersea Park for Formula E electric cars motor racing in June 2015, and repeat that for the next five years.

Surely the Council have taken enough commercial advantage of our public park?

There is always something going on and most of it not affordable by many Battersea residents. Obviously this does underwrite some of our taxes and some flexibility is reasonable providing it doesn’t disturb the peace or seriously interrupt the citizens use of what is after all a public park and which might be said to belong to all of us.

Now we have the prospect of a local Silverstone. It is our park. Do we really want this ‘exciting event’???

The following two extracts from the above cut to the chase:

‘In summary, the proposal involves 20 cars in total (10 being on the track at any one time) on a circuit using all the park’s carriage drives, with the British Genius events site housing the pits and the boules area being temporarily turned into a chicane. It is accepted that there will be some temporary disruption to the Park’s normal activities, but given that this impact will be minimised, and that there will be no permanent impact on the Park’s heritage features, it is proposed that, in light of the generally-positive findings of the Heritage Impact Assessment, ‘in principle’ approval is given to hosting the event, subject to the views of the Heritage Lottery Fund (HLF) and planning permission’ [….]

‘The Overview and Scrutiny Committee are asked to support recommendations. The recommendations in this Paper enable the Council to proceed with consideration of bringing an exciting event to the Borough, with attendant income, which would place the Council at the forefront of promoting electric vehicles in the urban environment and supporting its work on improvements to air quality. The global Formula E programme (of ten events in the first 2014/15 season) has now started, with the first race having been successfully held in Beijing on 13th September 2014’.

More information comes from The Battersea Society which is, to quote them:

“opposing plans to use the Carriage Drive of Battersea Park for motor racing in June 2015, and repeat that for the next five years.  The races would be between Formula E electric cars.  Some people may have seen coverage of the recent race in Beijing, using what was clearly a proper motor racing circuit.”

A YouTube video of the highlights of this event can be seen here:

Races in Battersea Park would be for one or possibly two days, during which the whole of the park would be closed to the public and 30,000 people would be expected to attend.

Constructing and dismantling safety barriers, pit stops, enclosures and a chicane would also disrupt use of the park for several weeks before and after the event.

“[We] believe all this is directly contrary to the purpose of the park and the extensive use local people make of it.  If the plans go ahead there will be a planning application (probably in November), but we fear this will then be treated as a formality.”

If you want your views to be taken into account, please contact your local councillors by email before Monday October 6 evening (the date of the next Council Executive meeting). You can find their details here.

Alternatively you can email the Leader of Wandsworth Council, Ravi Govindia.

5 thoughts on “Battersea Park to become… a local Silverstone?”