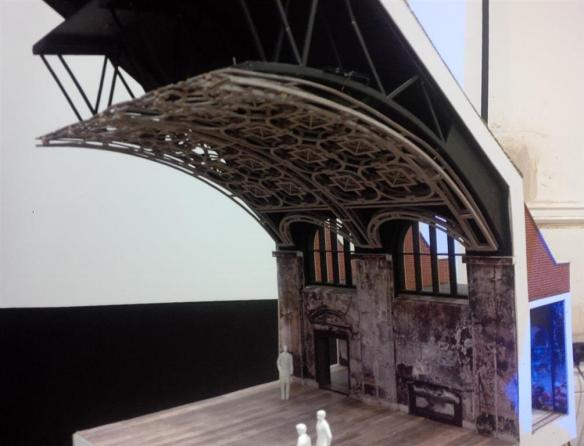 The Battersea Art Centre submitted its planning applications related to the rebuild of the Grand Hall at the end of March and they asked for people to support their proposals, especially on the Internal Application, which is the one proposing most changes with wall treatment and a new design for the ceiling, in addition to specific arrangements on the functionalities of the hall.

In what appeared to be a nice community involvement appeal instead of a real need for support, the Battersea Art Centre proposals got only 3 comments, with both the Battersea Society and the Putney Society supporting their plan . The Battersea Society said that “the proposals for restoration of the roof panels and retention of the patina on the fire affected walls are interesting” and the Putney Society said “this decision [to leave the internal walls as found] is of course the one that least inhibits an alternative scheme of decoration in the future“.

Unfortunately CJAG did not have time to comment as it was a speedy process and the applications were approved by delegated authority (i.e. by officers, without going to Committee to discuss) last week. However you will find below the letter that we prepared to comment on the application.

The Great Fire of London in 1666 gave an unlooked-for opportunity to remodel the chaotic and organic mediaeval city into a cleaner, more efficient – and indeed safer place.

So also the Great Fire of Battersea Arts Centre in 2015 gave a similar chance for innovation that previously cost – and its status as a listed building – might have discouraged.

BAC was already in the process of updating when the fire occurred, but the gutting of the Grand Hall area has necessitated a radical and rapid rethink.

In general the plan seems a sensible mix of restoration and innovation. The fact the exterior will be restored using original materials where possible means Lavender Hill will still have its familiar landmark.

But the Grand Hall and Lower Hall areas will see significant changes. The Grand Hall’s barrel-vaulted replacement ceiling looks to be striking visually, as well as having thermal and sound insulation to improve energy efficiency and acoustics.

And the new ceiling allows for a high-level technical gallery and more fixing points for lighting etc. to help the stage crew. One might question, however, how these high-level areas will be kept clean.

Since BAC now has an international reputation for presenting a wide variety of theatre and music events it needs versatile performing and spectator spaces. Even a few years ago its promenade production of Masque Of The Red Death utilised usually non-public areas and even had the audience emerging from a fireplace at one point!

Keeping the Grand Hall’s original balcony but adding dismountable side galleries linked to it seems a clever way to provide much more flexible audience configurations.

And at a lower level, the quite high and extensive stage – ideal in earlier times for dance or brass bands and arrays of civic dignitaries – being replaced by a flat floor will provide a much more adaptable performance space for today’s usage.

It is cheering that another relic of a past era, the restored organ, will stay. But moving it to the back of the balcony – something unlikely to have happened without the fire – looks a sensible idea which again will free up floor space.

Opinions vary about the decision to “consolidate wall finishes” – meaning that the smoke-stained walls will be stabilised but not painted over, retaining the memory, the battle-scars you might say – of the conflagration. Having been to several performances since the fire, I feel it adds to the atmosphere and is gently dramatic, rather like the faded glory of Peter Brook’s famous Bouffes du Nord in Paris.

Others may disagree. But BAC has accepted that it is a work in progress and will be reviewed as time goes by.

There are many other more mundane additions and refurbishment to bars, dressing rooms and other services which will give a welcome chance to upgrade facilities and rethink some of the spaces, all of which should make BAC even more effective and pleasant as a vibrant artistic and community hub.

You can find more explanation and photos of the proposal in our previous article: Presentation of the Grand Hall rebuild project at the BAC