Wandsworth Council is proposing to replace the current Northcote library (corner of Northcote Road and Chatham Road) with a new facility located at the place of the current Chatham Hall (currently a community centre and nursery). A new community hall will be built on the site of the existing Chatham Hall and the current library will be transformed into residential units and retails (the Council owns both sites).

According to Wandsworth Council, the current library building’s flaws include restricted access to its first floor children’s library, no room to safely and securely store buggies, no space to provide computer access on the ground floor, obsolete and inflexible shelving which does not make the best use of the available space, while the building is poorly ventilated and lacking natural light with inadequate toilet and baby changing facilities. [1: see comments from the residents about those points at the bottom of this article]

The Deputy Leader of the Council and Cabinet Member (community services) Cllr Jonathan Cook said: “Our aim is to provide a brand-new library with a much greater range of services than is possible in the existing library building, which was built nearly 50 years ago and is no longer really adequate or suitable to meet the needs of today’s population. At a time when demand for library services is growing, and while other councils are axing their library network, we want to improve and expand our facilities in a building that’s fit for the 21st century.”

As usual with money-tight (some say “carefully managed”) Wandsworth, it should all be financed by private money (no Council tax money used!): 9 residential flats would be built as part of the new library development while another 8, plus retail space for two shops, would be provided on the existing library site. The Council is also claiming that there will be no impact on parking as people purchasing or renting these properties would not be eligible for parking permits. 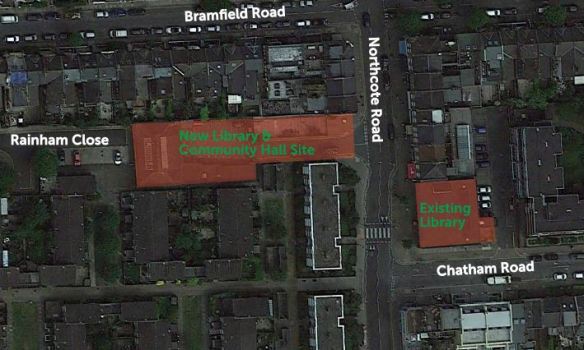 Aerial view of the sites

But a group of determined local residents is opposing the plan

Their main arguments against the current proposal are:-

The Northcote Library & Chatham Hall Development Protest Group (‘Protest’ meaning, according to them, “We are not happy with the current proposed development. We would like Wandsworth Council to offer various options for development rather than just offering one plan“!) organised a public meeting on Tuesday 28th February at Honeywell School.

It was well attended with 4 Councillors in the names of Peter Dawson and Jane Dodd (Cllrs for Northcote ward and Tory members) and Fleur Anderson and Tony Belton (Labour Cllrs).

The head teacher of Alphabet Nursery explained that despite the Council claiming that they want to take into account the nursery needs, they have not given any reassurance (rather the opposite):

During a meeting last November (the only one attended by the nursery, despite Cllr Dawson presenting “alternative facts”) they were told by Wandsworth Council that the new hall will meet standard regulations for their purpose. However, developer said later that the Hall was never designed to host a nursery!

Chatham Hall with a large outside area/playground

Another speaker acclaimed the large space offered inside the current library with its double ceiling. According to her, to such comment, a Council officer responded that it was showing that the building was not fit for purpose… a waste of space! (meaning that the Council would rather prefer crowded rooms with low ceiling , every centimetre used as in some IKEA demo box!)

Inside the current Northcote library, with space and high ceiling

A petition against the proposal has already attracted more than 650 signatures (and still counting). Maybe in the views of the Leader of Wandsworth Council, it will be disregarded as representing less than 0.22% of the total of Wandsworth borough inhabitants (click here to read how Cllr Govindia considers consultation results), but in the view of most local campaigners it is huge and shows the concerns of the local community with the proposal.

What to do NEXT

The proposal is currently at Feasibility Study stage until 11th March 2017 with the findings being assessed by the Wandsworth Council Community Services Overview and Scrutiny Committee in June.

You can Have You Say online or by writing to:

[1] Comments from the local residents denying the points raised by the Council to justify the proposal: 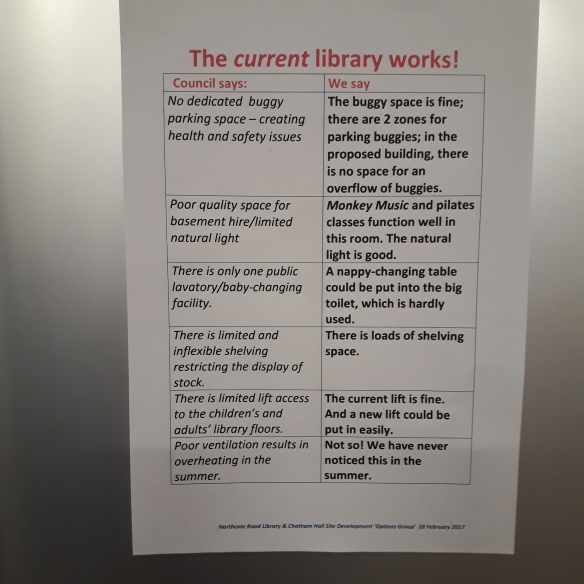