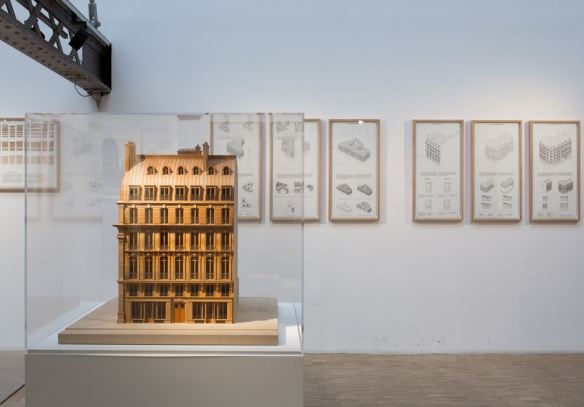 The renovation of Paris was a vast public works program commissioned by Emperor Napoléon III and directed by his prefect of the Seine, Georges-Eugène Haussmann, between 1853 and 1870 (the project was actually extended up to 1927). It included the demolition of overcrowded medieval neighbourhoods, the building of wide avenues, parks and squares; and more than 40,000 homes were built in this period! Haussmann established a list of strict rules such as:

Who would think of the Second Empire’s layout as exemplar network for mobility? And of the 19th century blocks as high functioning tool for today’s city life? Of the Haussmann building as an archetype of flexibility? Those are questions raised by this exhibition. With more than 100 drawings, maps, mockups and photos, the exhibition (organised by architects Umberto Napolitano, Benoit Jallon and Franck Boutté) analysed the constructions and aimed at explaining why this incredibly dense construction is not seen as cramped but rather comfortable.

The French newspaper Le Monde published an article where it explains why the density (21,000/km2 compared to London: 5,518/km2, and greater than Tokyo, Seoul or New York) is “acceptable and accepted“. Umberto Napolitano says that “some recent areas of lower density generate a greater apparent density and therefore much less accepted by their residents“. The article says that in the Haussmann block, plain and empty spaces are well thought out. Space does not surround the buildings as in many contemporary constructions, but courtyards provide this inside the blocks.

Haussmann blocks are compact but relatively narrow and shallow. While modern buildings have often a depth of much more than 10 meters, often up to 20 meters (in the case of towers), the Haussmann building shows a depth all along the building of 7 to 13 meters maximum. In the article the architect says: “The narrow layout encourages double or triple exposure in the flats. Thus this allows important access to air and natural light. Ceiling, 3 meters high minimum, increases the perception of sunlight. Those are qualities of comfort that make density acceptable“.

Modern projects don’t fit into the layout of the city

Built with the same standards and strict rules in terms of dimension and aesthetic, it gives some unity to the city. Franck Boutté says that “this unity is missing in contemporary projects which, as interesting as it can be, sit beside each other without fitting into the layout of the city”

Isn’t it what we read about Nine Elms? Rowan Moore, Observer architecture critic and author of Why We Build, says the new buildings don’t speak to each other. Deborah Orr wrote in the Guardian that Nine Elms’ developments are “forming what can only be described as an architect-off. A building from Norman Foster will jostle next to one from Frank Gehry, which will rub shoulders with one from Richard Rogers.“

And the whole exhibition is in full contradiction with views such as New London Architecture chairman Peter Murray who said last year that meeting the expected population boom “will inevitably demand more tall buildings“.