It’s been an interesting time for the shops in Clapham Junction. The main movements are in St Johns Road, where the Marks & Spencer has closed for a good few months for a major refit (p.a. 2019/1368). 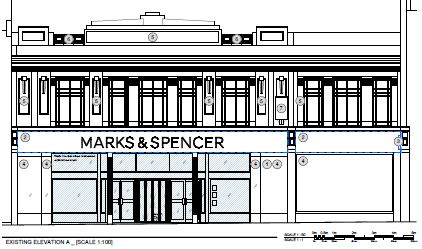 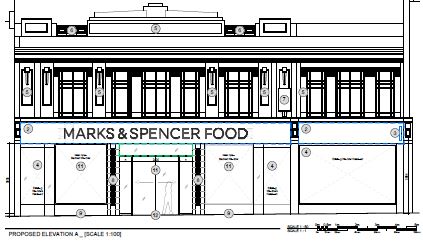 It’s currently covered in scaffolding and when the work is complete it will reopen as a food-only store.  From what we’ve heard it is designed to be a real flagship – stocking the full food range, and really showing what M&S wants to do with its store estate. This is good news and definitely a vote of confidence in Clapham Junction, bearing in mind that in recent years M&S has showed it’s no longer scared of swinging the axe on unprofitable sites – historic locations like Covent Garden have been closed; last year they closed down nearby Putney branch, and (we’ve heard from a fairly reliable source) they were lined up for what later became Debenhams in the Southside centre in Wandsworth, until pulling out in a previous bout of downsizing. This could be a strong competitor to Waitrose, and it will be interesting to see if some of the underused space in the building (which has been an M&S since 1914, and has several upper storeys and service areas) is redesigned.

One of our readers noticed that in early drawings they were signed as ‘M&S Clapham’. Hopefully they will put the correct location at the end of the refurbishment, either ‘M&S Clapham Junction’ or ‘M&S Battersea’ (or both)! 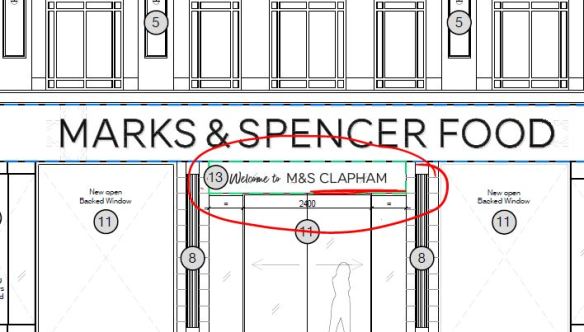 Debenhams remains one to watch. The chain is having a tough time but the Clapham Junction branch is the local survivor so far, with both Wandsworth and Wimbledon sadly announced as closing at the end of the year (as part of a closure of around 50 stores), with significant loss of jobs and a potentially severe hit to the two shopping centres those branches are in. Clapham Junction’s branch is busy and definitely one of the UK’s more successful branches, and it’s notable that this branch remains well stocked, while others seem to be fading. However the company is still facing severe cost pressures and has asked both the landlords for rent cuts, and the Council for a comparable cut in its business rates (effectively a ‘Council tax’ for businesses).

It’s becoming clear that Debenhams are getting serious on slimming down – we understand they are exploring with landlords whether they can reduce the size of some of their stores – with an ‘ideal’ size being around 100,000 square feet. As a guide to what these sizes mean: the current Debenhams is 140,000 square feet (over five unevenly-sized floors), while T K Maxx next door, which was previously carved out of the space, is about 30,000 square feet (over two floors).

Debenhams have already sublet some space – like a branch of Sports Direct that’s still operating profitably on the top floor (maybe surprisingly, given that Sports Direct’s Mike Ashley reportedly isn’t getting on too well with Debenhams  at the moment), and the Joe and the Juice in-house concession on the ground floor. It seems quite feasible that more of the space at Clapham Junction could be split off – for example we suspect Boots would be only too happy to take over the basement (as their current store on St John’s Road is far too small, and the larger store on Falcon lane is just in the wrong place), as would any number of other operators like Decathlon or The Gym Group.  The T K Maxx is one of the busiest in the country, showing that this is a good spot to trade.

We previously reported on plans to substantially redevelop and expand Clapham Junction’s branch of Lidl. Things have since gone very quiet (we understand that it wasn’t easy to find an alternative site to trade from during the works), and the store has had an internal refit to try to make better use of the existing space. However, we have just received an update from Lidl:

In addition to the proposals in our planning application we have been considering different options to make improvements to our Clapham Junction store. This included a modernisation option which has now been carried out. We continue to consider options for further development, but there are currently no plans to make any further changes to the store in the immediate future.

They have also confirmed that application 2017/2972 is now on hold. It remains a profitable but significantly overcrowded store, that’s hard to keep stocked through the day and that misses out on trade due to lack of space – so in the longer term we expect redevelopment still looms.

Blacks is closing.  According to the staff this is nothing to do with the levels of trade at the branch – but rather a result of the landlord significantly increasing the rent if they want to continue to trade there.  We were surprised to see this, as Blacks are a solid tenant (now part of the same group as JD Sports; who are consistently profitable) and likely quite desirable to a landlord. Mountain Warehouse has opened further along Northcote Road (following a previous pup-up shop in what has since become Pret a Manger).

Renovation and extension of Whole foods

Clapham Junction’s branch of Whole Foods Market, which has recently been extended in to the unit alongside, finally completed its extension and renovation with a repainted frontage and a new sign (and, from what we can tell, a new logo as well).  We’ve got no idea why there was a gap of several months between the main frontage being completed  and the sign finally going up – but the new store does look a tidier and the cafe area inside in particular feels more spacious.  It’s worth remembering that retail giant Amazon bought Whole Foods in 2017 for a staggering $13.7 billion!  Most of the Whole Foods business in the USA, and Amazon is experimenting there on how to make the link between its business and Whole Foods work; we suspect the handful of UK stores (there are currently just seven) are also being watched quite closely as Amazon plots how to expand in to the food business, and we’re likely to see various experiments down the line. 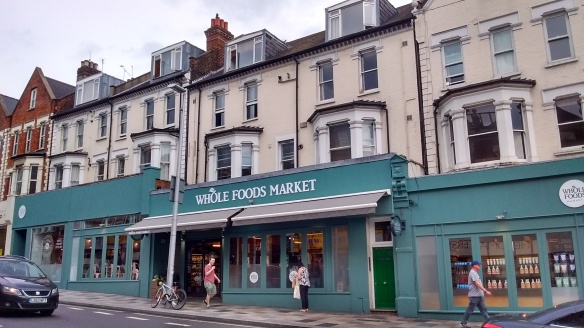 The former Starbucks building on St John’s Road (which the company left, to move closer to the station and presumably catch more of the takeaway trade)  is still going through the planning process with a view to demolition and rebuilding – which means a string of very short term tenants is likely. The upper floors are empty.

Meanwhile in the station, the shops in alcoves in the station subway have all closed (with some relocating to the bridge).  We understand this is to reduce congestion in the corridor. Barclays opposite the station is also having a long-overdue refit – maybe in response to Metro Bank having opened up a much glossier branch a few doors down.

Clapham Junction has a new ice cream vendor (in St John’s Road) – Amorino have opened up in the former Giftland unit (opposite Pret).  They’re well established and known for moreish flower-shaped ice creams (we think the Soho branch, on Old Compton Street, was the first – it’s been there a good few years). 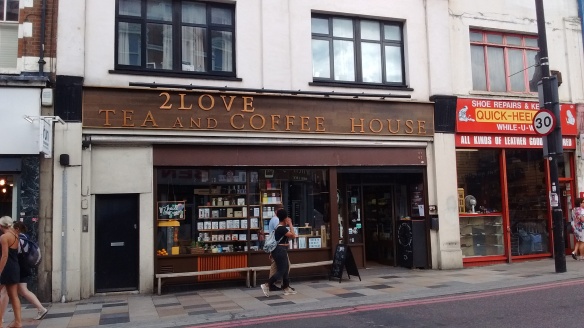 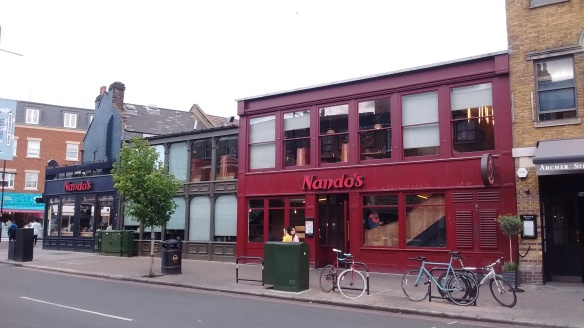 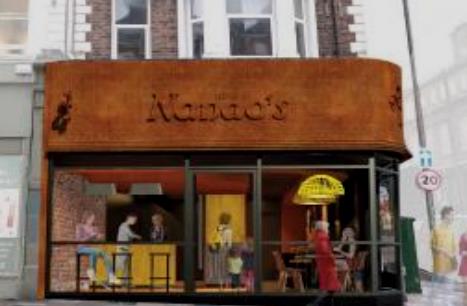 We’ve seen three second-investments: Joe and the Juice has opened its second outlet in the former Starbucks on Northcote Road (following an in-store one in Debenhams); and Nando’s is starting work on its second branch on lavender Hill (adding to the existing one at the Battersea Rise junction), and 2Love tea and Coffee House is opening up on Lavender Hill (in what was previously half of Braggins Carpets), following their first branch on St John’s Road.

There’s no news on the former Valentina on St John’s Hill.  As sister site Lavender Hill for Me has reported, the site is looking increasingly wild!

While there are still some big and menacing clouds looming over the UK retail landscape, Clapham Junction has so far weathered the storm quite well. A relatively wealthy population, with low car ownership – and a relative lack of big out of town retail options – definitely helps. Despite our well-documented concerns about overdevelopment, there’s no denying that the growing local population also helps the town centre keep trading successfully. And it’s clear that many of us aren’t creatures of habit, but will will try out new restaurants and explore new businesses –  helping people get going in the tricky early stage of starting a business. But we’re not out of the woods yet, and with retail employing thousands of people in the borough, it’s always worth encouraging people to make the most of the town centre on our doorstep.