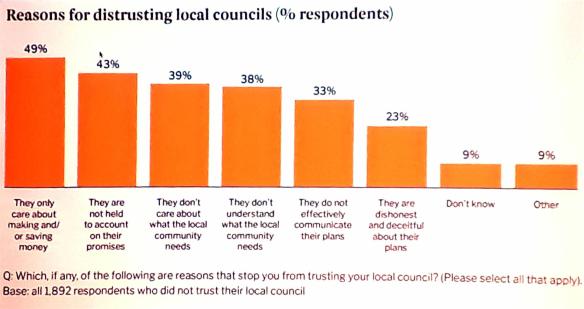 On Tuesday 14th January, the London Forum of Amenity and Civic Societies organised an Open Meeting on Community Participation in Planning. They had four passionate speakers sharing their idea on how we can get more and better community participation in planning.

Ian Harvey, Executive Director of Civic Voice, shared the results of a recent survey (1892 responses), showing that the public does not trust the planning system nor does it trust planning developers.

They also think that the weigh of communities (i.e. the people really living where there is a proposal for development, and who are going to be first and foremost impacted) is negligible.

In putting forward proposals, the Civic Voice’s survey shows that 57% want to be involved in local decision making but only 26% feel they are. It is clear for Ian Harvey that the British public has lost confidence into the planning system.

Amongst things to improve they insist on more opportunities to help shape proposals and a “really, proactive and effective engagement”. They also want to ensure communities have a voice in design review.

As one of the participant said, they once received a response from a Town Planner saying that they don’t want communities involved because it would take much too long. To the question of how to deal when facing a Council that organises a lot of consultation but use it as a tick box exercise with the result mostly ignored, Ian Harvey mostly said that this is the role of civic societies to monitor and remind the local authority of their promises.

Ben Rogers, the head of the Centre for London, which has published extensive research advocating more and better community participation in planning, talked about the dramatic cut to borough planning system, illustrated by the graphic below.

Koen Rutten of the Town and Country Planning Association, who has led their recent work on public participation, explained that the current situation shows that 88% say that there is no collaboration/co-creation/co-production with residents in relation to planning.

TCPA made a series of recommendations for public participating in planning:

And Daisy Froud, an expert facilitator of community participation much-loved by the communities that she has helped, made a passionate contribution about public participation. She mentioned an article in The Guardian (How power operates in modern Britain: with absolute contempt), with the quote: “It was not that we stayed silent, but that they never responded. It was not just that they ignored us, but that they viewed us with contempt” that could be extended to the way local authorities treat community involvement regarding planning matters. She also underlined the focus of governments on economic growth, preventing local community to talk about what concerns them most.

This meeting was very encouraging, showing that we are not expressing concern on the restrictive level of community engagement nowadays. Most of the proposals have already been put forward nearly 2 years ago by the Clapham Junction Action Group: see article on our aspirations to reform planning decisions in the borough of Wandsworth. On today’s date we are still waiting a formal response from the Council despite a promise from Cllr Guy Humphrey, the chair of the Planning Application Committee, last July.