“We wrote to each individual person and sent the simple summary to arrive in their inbox on Friday to try to reduce the risk of them taking a lazy political group decision. All in vain” was the reaction of one of the Parma Crescent’s resident after the decision from Wandsworth Planning Application Committee to grant planning permission by 8 votes in favour (including 2 Labour Councillors) to two against.

Following a good introductory five minutes speech from the local ward councillor, Jonathan Cook, explaining the residents’ concerns, it was quickly obvious that the Conservatives Councillors were in favour of the developer’s tactic to maximise their profit and ignore the local residents. What was more surprising is that two Labour Councillors joined the Tory supporters in this shameful decision.

We explained in several previous articles why the site was sensitive and especially why the developers, with the help of officers, were playing a little game of iteration to get as much as possible from their site, in contempt of the local community and the planning rules.

The developers’ game: 5 successive applications to eventually get exactly what they wanted

The initial application, to replace an unusually small house which had an unusually large garden on Parma Crescent with a rather larger building housing many flats, was changed half way through the planning process (see our report HERE) and eventually withdrawn. A second application came later in 2020 and the controversial application was approved by councillors on November 25th, 2020. The decision was reached with the help of the officer who twisted the planning policy to fit the developers’ purposes.

In this case, the Housing SPD (adopted November 2016) is quite clear,:

“Housing targets can be met without relying on garden land. Wandsworth is a highly built-up urban area where the contribution of gardens make a significant  contribution to the character and appearance of the borough, particularly in conservation areas. It is therefore not an appropriate form of development in Wandsworth, for the reasons given in the Mayor’s Housing SPG and in the DMPD paragraph 3.22.”

And this section is nowhere restricted to house extension only, thus the officer misled the councillors in his explanation. You will find more details in our article explaining how the officer went even further, providing arguments to the developers should the Committee decide to refuse the proposal.

But it was not enough. As developers and officers already discussed the possibility of adding a basement, they submitted a third proposal, changed again half way through – fifth change (when it was clearly breaching planning guidelines). This is the application (2021/0408) that was discussed last Tuesday, to dig a full basement and provide 7 residential units and is expecting to host 25 people. As we wrote, the application is very confusing due to the developers changing constantly the scheme.

Many arguments for refusal

The updated proposal added even more arguments to reject the scheme. Although the bulk envelope of the proposed scheme was the same, the already exiguous garden space for the occupants of the ground-floor flats was made even worse in the revised proposals by the need to provide voids for light to the basement accommodation 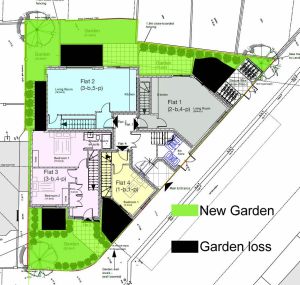 Proposed garden– in black necessary voids for the new basement, reducing even further the tiny green space in the scheme.

In addition, there are rules for minimum space standards stated in the London Plan 2021 and set out in Policy D6 Housing quality and standards. Two of the maisonette units (F1 & F2) are spot on the absolute minimum of 79sqm and 93sqm (and below the minimum that was required in 2010 of 83sqm and 96 sqm for the same dwellings). This is the same on several bedrooms and we suspect that some of the figures have been twisted on purpose.

In the committee: councillors not prepared, officers providing vague answers and the chair trying to bypass the voting rules

Had Tory Councillor Piers McCausland  really looked at the case? Apparently not, as he did not express a word on the minimum standard space except to say that he does “not see a problem with density” and admitted: “I am not familiar with Parma Crescent“. “It’s just a matter of taste” he said!

Tory Councillor Lucy Mowatt only said that she wanted assurance on planting (despite all the elements showing that 80% of the green space was smashed and that reality shows that it’s not possible to enforce tenants to maintain gardens), but was supportive. Again, apparently no knowledge of the specific elements of the scheme.

We must acknowledge that at least Tory Councillor Paul Ellis was not unaware of the developers’ trick as he commented: “It’s amazing when developers got approval and come back with something a little bit different, a little bit bigger. It’s unusual to have anything smaller“. However, he said that there was a “huge pressure to maximise density in developments” (even so, does it permit all excess?) and therefore it was difficult to vote against.

“We’ve already given permission 6 months ago with many of us doubtful, and it covered the point of providing more accommodations. You cannot just add as much as you like. There is a very good ground to refuse this application on the basis of over-development, over-density, un-neighbourly”

This was apparently not the opinion of Council officer Nick Calder (Head of Development Management) who wanted to proceed with the vote without first drafting the motion to refuse, to what Cllr Belton sharply retorted: “With respect, it’s the officer’s job to advise and if we haven’t got the reason completely right, then give us a reason!“

The Chair, Tory Councillor Guy Humphries, who previously said: “in my opinion we might be stressing the point a bit far“, made a last comment that “a refusal will not make much more difference” and pushed for an immediate vote to approve… just to be stopped short of breaking the code of meeting practice by an officer saying that a vote on the motion for refusal needs to come first. We nearly had a breach of procedure!

All in all, only Labour councillors Belton and Critchard voted the refusal, with all the others, including Labour Councillor Claire Gilbert  and Councillor Graham Loveland  joining the Conservatives councillors to approve this shameful application.

You can watch again (for a few months) the planning decision with this link (the first 40 minutes)..

The last word goes to a local resident, appalled by the decision and who commented:

“Seriously – what on earth is the point of the objection process? Answer: Only window-dressing. The planning officers are trammled in bureaucracy and use it as a method of shutting off constructive debate and any exploration of trying to reach a win-win compromise.”

PS: Yes, this is again an email full of name dropping. This is public domain (anyone can watch the video with the link above); this is called scrutiny and, unlike Councillor Peter Dawson, conservatives councillor for Northcote ward, who strongly criticized this when I published a similar article in 2012, I believe this is a fundamental element of democracy.