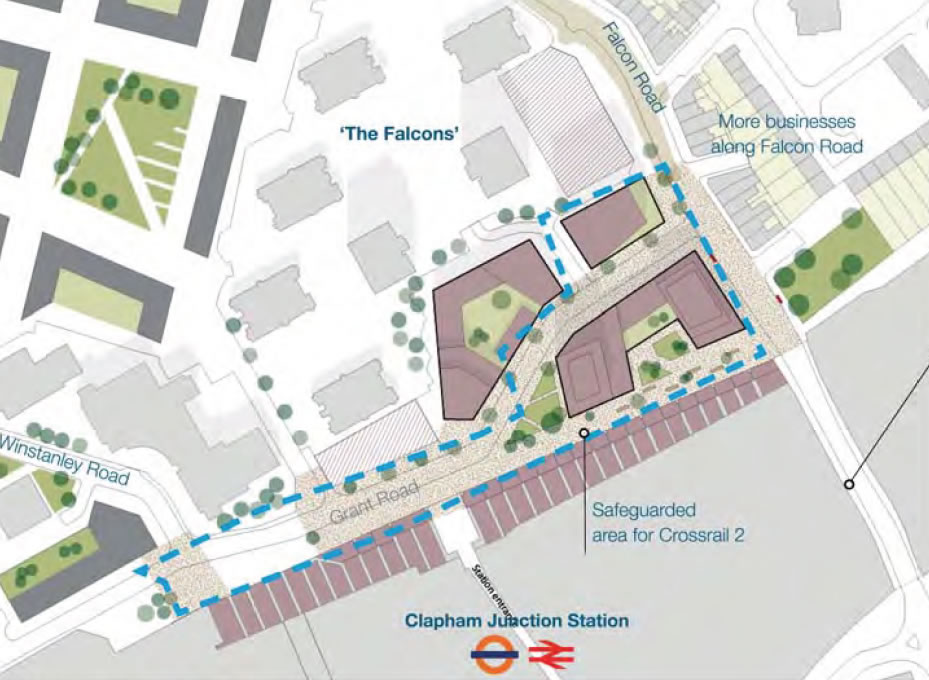 Protected area for Crossrail up to 2030 … just where the Council is planning to locate a cluster of towers.

This analysis intends to complement the very poor attention given to the site allocation sections in the draft local plan proposed by the Council. For a full information, read our presentation with the list of site allocations that we are describing.

CJ3 Land on the corner of Grant Road and Falcon Road, SW11

There has been no development in this area since the previous 2015 Local Plan, if we except the additional storey built on both the properties at the corner of Grant Road and Flacon Road.

The current vision presented by the Council is to build a cluster of very tall building on the location.

However, it was later confirmed that this area would remain safeguarded for Network Rail. We know nowadays that arguments raised by the Council were exaggerated and did not prevent the continuation of the regeneration project.

It must be noted that the 2013 consultation which included a choice between several options for the Winstanley and York Road estates regeneration was not consulting on the Bramlands site: all options presented a similar development for this site. It was later revealed in a 2014 exhibition that the Council vision includes a cluster of several buildings of more than 20 storeys for this location.

It was in breach of previous Urban Design Study (2009) which was stating: “Applications for buildings of more than 6 storeys will generally be unacceptable, and will only be considered in exceptional circumstances.”

” The Council appears to hope that this safeguarding might be amended in 2020/21 (sic); but it is unclear how the “refreshing” of the current safeguarding directions currently being discussed by TfL and the Government will affect the site”

There would be some merit in cleaning, lighting and painting the overhanging viaduct along Grant Road, where the small businesses in the dozen or so railway arches have long struggled to attract the footfall that you’d expect for the edge of a major shopping district with almost 100% occupancy of retail units, next to one of the UK’s busiest railway stations.

This is an interesting structure that could look good with a bit of TLC and some of the arches are impressively large – but it feels like there’s a great deal of missed potential here.  Derelict and abandoned vehicles in the car park under the viaduct only add to the general feeling of decay and neglect.  Any improvement would go some way to making these feel a bit more like a part of the town centre worth visiting.

Everyone stands to benefit from this – it’s helpful to the retail centre, to residents, to developers.  As a very central and visible bridge with huge levels of pedestrian traffic, and scope for quick implementation, any improvement ought to play well politically.  It’s probably essential before the Winstanley development really gets going at scale.

Desire for permeability… without any detail

“The site allocation mentions the gated housing at The Falcons which borders the site to the north (but not the similarly-gated GradPad development), along with a desire to achieve greater integration and permeability, particularly with the town centre and the Winstanley Estate. But there is no indication of how this might be achieved, or how gated developments might be persuaded to open up. Nor do we understand what is meant by developers contributing towards cost of dedication of land at the corner of Grant Road with Winstanley Road.”

Again, the officer’s description seems to have been drafted without any real knowledge of the current situation, and without bothering talking to the relevant communities to get missing information.