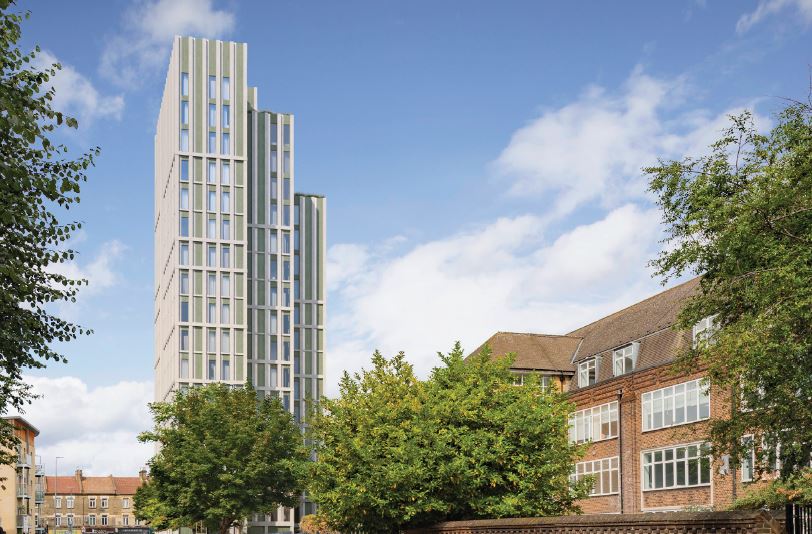 Developers are applying for a building of up to 18 storeys high entirely dedicated to co-living space (up to 213 shared-living units with gym, bar, lunge, workspace…etc), just beside the Harris Academy on Battersea Park Road (p.a. 2021/5013).

It is worth noting that the only tall building existing in this area is the 21-storeys Castlemaine Tower (which as been re-cladded completely last year, following the Grenfell disaster), highly visible from many part of the borough, including Clapham Junction (Asda in Lavender Hill), Battersea Park but also from the Shaftesbury Park Estate Conservation Area to the south.

Regarding Castlemaine, the Battersea Society explained in a previous objection that the building is actually an anachronism that would not meet planning policies nowadays:

“This 20 storey social housing development is part of ‘a late example of the punchy high-density architecture of the 1960s’*. It would not meet current planning policies and in any case we are being asked to assess a commercial development on land formerly in public ownership which provides just 12 social housing units, 6 each of 1 and 2 bedrooms, rather than a large quantity of social housing. The site location overview on page 7 of the Design and Access Statement clearly shows that Castlemaine is an anachronism within the streetscape” [*Survey of London, volume 50 p.178-179]

The proposed 3 Culvert Road tower will be a highly visible and overbearing addition to the landscape.

There is clearly a potential for a new development on that location. However, the proposal offers little architectural interest and do not sit well with surrounding properties. The immediate vicinity consists of 3 storeys Victorian properties to the North and up to 5 storey buildings with the Harris Academy school, Merryfield court, Atkinson House etc.

The proposed building itself would be out of keeping with the scale and character of the surrounding area and other nearby developments. It seems that no effort has been made to respond to the surrounding context, as shown in the drawing below. 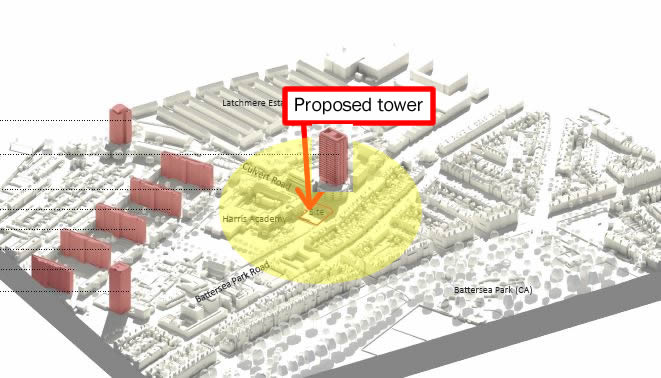 A tower of 18 storeys in the location will have a severe impact not only on close vicinity but will be visible from a distance and will add to the massing of the existing Castlemaine tower. Although the Planning Assessment explains that the new proposal is apparently only 4 meters taller than the previous approved one, it does not mean that the harm will be any less than stated previously.

Therefore, based on its scale and massing, out of place with the surrounding properties, its absence of merit and adverse effect on the local area, the proposal fails to comply with the DMS4 criteria for tall buildings.

This co-living development is one of several proposed for Battersea. Co-living units are currently justified by Wandsworth planning officers as a response to the lack of affordable small units. In the Hazel Court scheme, the officer presented the lack of affordable small units to rent in the borough not something to be addressed in term of affordability, but only by reducing the size of the units and sharing some common utilities of the living space. The officer writes:

“At the median household income of those households living in the PRS only 44% could afford a I bed PRS property. It is therefore argued that there is demand for co living developments in the borough.” [PRS = Private Rented Sector]

Officers in charge of policies have a different approach to those in charge of planning applications. According to officers in charge of drafting the local plan, the policy is trying to resist co-living expansion and developers will need to demonstrate that the site is not suitable for normal development. In the Local Housing Needs Assessment 2020, it says (page 83):

“Whilst it is recognised that shared accommodation can be an increasingly valuable form of accommodation, there is an acute need for self-contained residential dwellings, and in particular for affordable rented and Affordable Home Ownership (AHO) dwellings. In the event housing capacity restricts LBW to meet its objectively assessed housing need or affordable housing need, it is suggested that LBW consider conventional forms of housing ahead of co-living developments.”

In addition, it highlights that due to the specific characteristics of the co-living units (very small units, often consisting of bedrooms only), it targets a population that does not intend to continue live in the borough. It says (p 83):

“Taking into account that LBW already has one of the most mobile populations in England (see Table 23), there is a risk that the provision of co-living accommodation would intensify this issue further. As such, it would not support the creation of mixed and balanced communities in these areas.”

It is normally expected that the applicant will offer a payment of several hundred thousand pounds in lieu of affordable housing, despite the conclusions of the viability assessment stating that the development cannot accommodate affordable housing at this stage. This seems to be the standard procedure to try to get approval while avoiding to comply with local planning policy, and recent schemes show this practice is encouraged by officers in Wandsworth (see Hazel Court). However, the applicant has decided that his promise to deliver a Sports Hall (that they needed to destroy to transform the site) for the Harris Academy is a costly enough commitment (point 6.29 of the Planning Assessment).

A smaller scheme was approved in 2017

The principle of a tower at this location has been agreed as an application for a building of 14 storeys (including 39 residential units) was granted on 11th September 2017 (2016/4188). Prior to this approval, the site comprised open space for the school and the ancillary caretaker’s dwelling. Soon after the demolition of the sports hall in July 2019 and excavation of the basement for the residential block, works on site stopped completely and it was left abandoned. 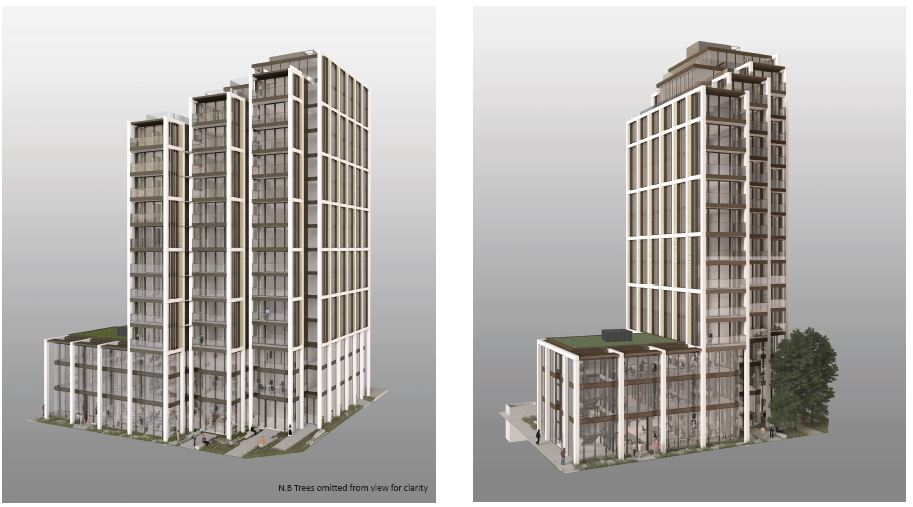 The original proposals was completely different and provided 27 market flats and 12 affordable flats (30%, quite a good performance for Wandsworth) all of that being scrapped in the new proposal.

A Sports Hall for the Harris Academy was included into the scheme but as we know, the developers never pursued with their application and the school has been left without for quite some time. The developers, quite cynically, promise again to deliver the sport hall, but we will remember that it was already their promise that they never delivered a few years ago… (note that this is not part of the application, and has got a different reference: 2019/1431).

The sad part of this story is not that it is likely to be accepted, but that it was even considered and that an officer in Wandsworth found appropriate to (maybe encourage it or at least) recommend it.

Last but not least, below is a comparison between the site before they started to destroy the plot, and the proposal as it should stand. Draw your own conclusions… 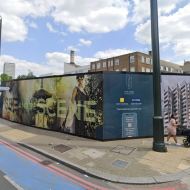 UPDATE 21/11/2021: We have just stumbled upon an excellent article on this same topic published in September on the Lavender Hill For Me website. The article gives additional detail and is worth reading.

In a nutshell, as the principal of a tower at this location (already very controversial) was acted with the previous application, it is very likely that a tower will be built. The article focuses on the design and new purpose of this tower. As the article says: “what’s being planned looks like a much cheaper and lower-quality build than what had previously been proposed. Whereas the previous plans – approved back in 2017 – gave every flat plenty of generous windows and a decent sized balcony, the only outside space in the new development is a set of roof terraces“.

The article gives also much more detail on the Sport Hall, including some background. It appears that Harris Academy exchanged the land (which was before their caretaker’s home) on the promise of the development of a new sports hall. As what a promise is worth, that did not happen and the work stopped, leaving the school with no usable land and no sport hall.