The life of planning application for 5 Parma Crescent looks like a groundhog day. While the construction has started (at least the demolition and the huge excavation as shown on the picture above), the developers have now realised that not only the size of the new construction put next door building at risk, but they are also blocking a side entrance. This is somewhat “problematic” to use the applicant’s own word!

A few days ago was released a new planning application (p.a.2022/0389) for the very controversial development of a little site in Parma Crescent. Last year the fifth instalment of the proposal was approved by the Tory councillors with the support of two Labours (including the new opposition speaker, councillor Loveland).

Legal issue, structural problem and you guess… need for the building to be taller!

According to the architect’s letter, they have spotted several difficulties. 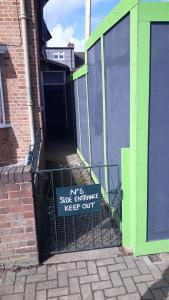 The first one is that the tiny passage to no. 6 side entrance is part of the freehold of no. 5. Condemning the usage of this entrance would create a legal challenge. Although the applicant seems to discover the issue, the submitted drawings have always been showing the need to retain that pathway. It has already caused problems as there is a notice board to prevent that access to be blocked.

The second issue is due to the size of their new building and the full excavation to create the basement units: The structural Engineers advise that, due to the difficulty of controlling
differential movement, the two buildings (new no 5 and existing no 6) should be separated.

The proposal is therefore to make the 2 buildings separated, and simplify the external aspect of the new roof to make it simpler (in the architect’s word: “a simple and straight-forward appearance”).

Last but not least, as you can guess, there is the demand to raise (by 12cm) further up the size of the building (to comply with Building Regulations according to the applicant).

An obvious overdevelopment in breach of planning guidelines

We explained in several previous articles why the site was sensitive and especially why the developers, with the help of officers, were playing a little game of iteration to get as much as possible from their site, in contempt of the local community and the planning rules.

The approved development should replace a modest 3 bedroom house and a garage with (unusual for the area) large garden into a building including a full basement and providing 7 residential units and is expecting to host 25 people.

The approved scheme plans to retain less than 70% of the previous open space (in breach of the Housing SPD adopted November 2016), and cram inside the building as much as they can possibly put on: two of the maisonette units (F1 & F2) are spot on the absolute minimum of 79sqm and 93sqm (and below the minimum that was required in 2010 of 83sqm and 96 sqm for the same dwellings). This is the same on several bedrooms and we suspect that some of the figures have been twisted on purpose.

New scheme – in black necessary voids for the new basement, reducing even further the tiny green space in the scheme.

Will that be the end of changes? We can doubt as the applicants as stretched all possibilities to a maximum and it is likely that further difficulties will raise during the construction.

One last word: the tax paid to the Council for the construction should be around £155,000. See our article: Is Wandsworth well managed or addicted to property developers’ money?