Following the decision to defer (not withdraw as it is often misrepresented!) on the 17 storeys scheme in Swandon Lane (Homebase site), the Wandsworth Guardian published the following article on 8th April 2016. END_OF_DOCUMENT_TOKEN_TO_BE_REPLACED

An article was posted 2 weeks ago on the Independant, showing how London might look like if all its planned skyscraper are built. It is based on the work of Stephen Smith of the BBC’s Newsnight who reported about the 250-odd high rise towers to be built in London which are currently in planning or in progress. END_OF_DOCUMENT_TOKEN_TO_BE_REPLACED

Yesterday night, BBC News (10pm) showed a report from Political Editor Tim Donovan (3’08”) about the permission given to a Chinese developer to double the size of a new luxury hotel in Nine Elms at the expense of office space and the associated jobs.

Developer Dalian Wanda has dropped all 10,000 sqm of office space from its planned riverside development at One Nine Elms in Vauxhall, along with his promise of nearly a thousand new jobs. The space has been replaced by more luxury hotel rooms and private apartments.

The report says that Wandsworth planning documents reveal it will mean at least 400 fewer jobs – nearly half those originally intended – being brought to an economic “opportunity area”. END_OF_DOCUMENT_TOKEN_TO_BE_REPLACED

The Architects’ Journal (UK’s best-selling weekly architecture magazine) makes us the honour of being featured as Letter of the Week (edition 02/05/2014). 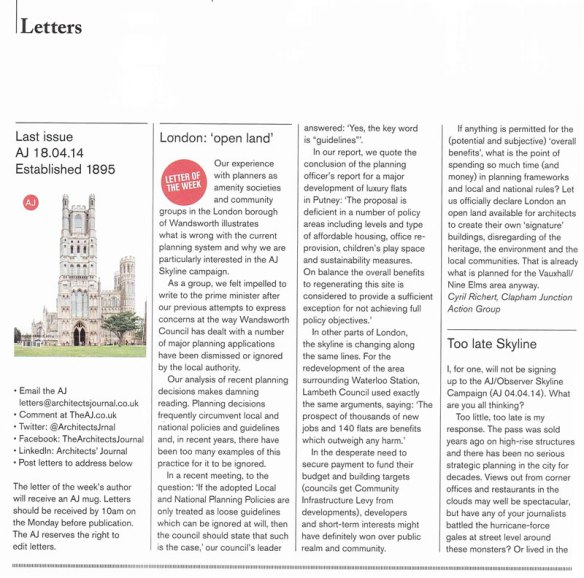 END_OF_DOCUMENT_TOKEN_TO_BE_REPLACED

Following last week article in the Wandsworth Guardian: “Council rails at ‘Nimby’ campaign organisations“, a few opinions were published in the week’s edition (click on the image to see it bigger). 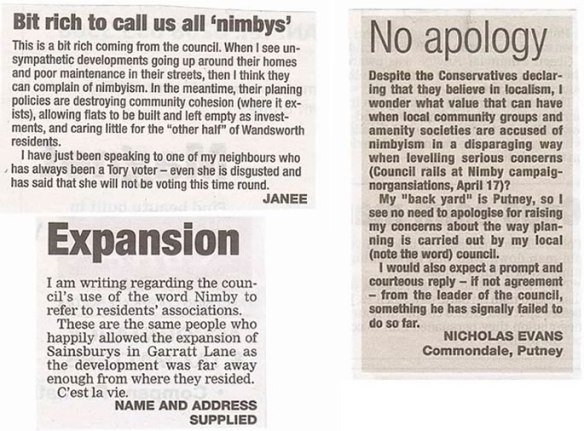 Many thanks to Sophia Sleigh for her report of the Putney Society, Wandsworth Society, Clapham Junction Action Group and Friends of Putney Common’s open letter to the Prime Minister.

The article starts with : “Wandsworth Council has accused community groups of being ‘NIMBYs’ after they wrote to David Cameron to complain about the borough’s planning procedures.” END_OF_DOCUMENT_TOKEN_TO_BE_REPLACED