At the beginning of November, the Council published a note stating that in view of the budget review they needed to consider cuts in the libraries budget.

They are considering 2 options:

Councillors on the environment, culture and community safety scrutiny committee discussed the changes at their meeting on November 15.

The Conservatives councillors all approved the proposals.

“Agreed (by 6 votes to 2) that the recommendations in paragraph 3 of the report be supported subject to the addition of the following wording to recommendation (b): “it being noted that the review had excluded the closure of other neighbourhood libraries;”.“

However, confronted to the Latchmere cou﻿ncillo﻿rs﻿ (Labour) who all spoke against the proposals, the final decision included:

“that no further consideration be given to the closure of the York Gardens Library, until full analysis has been obtained of the footfall at the Library, including numbers attending to access books whilst on the premises and to access the other services provided in the library, such as use of the ICT suite, the Job Club and the Homework Club;“

The need of further investigation appeared after ﻿Cllrs Belton﻿, ﻿Hogg﻿ and ﻿Speck﻿ addressed the Committee arguing against the inclusion of the closure in the York Gardens in the consultation on the savings options, asked to investigated data on new people in the area and referred to two petitions that had been received opposing the closure of York Gardens Library which would be presented to Council.

Reading through the report by the Director of Leisure and Amenity Services, the Option 2 (proposals for reducing opening hours) could be decided while maintaining the York Garden library (saving £422,000 in 2011/12 and £563,000 if York Gardens library closed rather than be subject to reduced hours).

Regarding the cost per visitor/user the report says:

“It is difficult to make completely accurate comparisons [between the libraries] as, for example; the three neighbourhood libraries each have some form of additional facility such as a hall or IT Centre, and Battersea Library houses the Reference and Heritage sections.“

With all those arguments, you can guess the position of Wandsworth Council. To retain the library? Environment and culture spokesman Cllr McDermott said:

“My own view is that given the difficult financial circumstances we face the option I favour would be to reduce opening hours and close the branch at York Road, but it will be up to my colleagues and members of the public to determine which choice is finally made.“

Despite the very negative comments from Conservatives councillors (keen to close a library in a Labour Ward?) the decision can still be overturned. In the past three days, more than 500 residents have signed petitions to keep the library open and collection continues. You can download the petition HERE and return it by FREE POST.

A Save York Gardens public meeting will be organised for 2pm on Sunday, December 5 at the Library (click on the image below to see bigger). 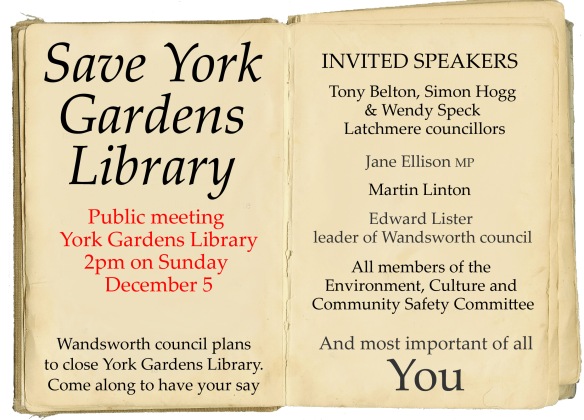 Councillors in Latchmere are also encouraging residents to write to the council to expres their unhappiness with the decision.

4 thoughts on “Library services in budget review: York library to close in Latchmere?”