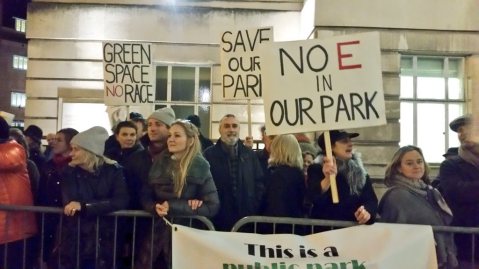 Those campaigning to preserve Battersea Park from the Fomula E event have all reasons to celebrate as they have secured a great victory on their fight. After a long and exhausting process, it seems that they have achieved a binding Agreement axing Formula E future events in the Victorian park.

As we reported in April, Battersea Park Action Group (BPAG) issued a Claim at Court setting out the main reasons in law why the Council has acted beyond statute in imposing the construction of a Formula E car racing circuit within the park over a total period of disruption of 19 days. They also managed to secure donations exceeding £20,000 to fund the legal cost.

A Judicial Review, challenging the hosting of the Formula E Championship in Battersea Park, was due to be heard in the High Court on 24/25 May between the claimant James Jackson (supported by the BPAG) and defendant Wandsworth Council with Formula E as an interested party. However a last minute agreement has been reached that James would withdraw his legal claim with his costs to date being met and “the Championship this year will go ahead but further consideration will be given to future years“.

In a joint statement, the parties involved said:

As required under the planning conditions for this year’s event, the park will be reinstated by Formula E to its original pre-March 2015 condition.

James Jackson feels that the settlement reached represents a favourable outcome for all parties involved given the preparations already in hand for this year’ s races as well as the obligation to reinstate the park.

The exact terms of the agreement are confidential to the parties; however the statement issued by Wandsworth Council today 24th May was a bit more explicit, saying:

“Formula E has notified us that they will be holding their final races in Battersea Park this summer and that from 2017 onwards they will be seeking alternative locations.”

As the Council is defeated, the deputy leader claims a great achievement

Here we need to remind our reader that during last year Council’s debate to grant two more years (up to 2017) of Formula E in Battersea Park, we heard amazing statements from some Conservative Councillors.

Nightingale Cllr. Ian Hart accused BPAG of faking the petition signatures; Cllr. Torrington, a resident of Putney, declared that parks were a luxury. At the same time Cllr. Cook made insulting remarks in the press, implying that people living on the edge of the park were only nimbies.

Cllr Cook must have “eaten his hat” (not sure he’s got one) but the Council avoided any mention of the campaigners or the BPAG in their statement. It was certainly not that easy, as the decision to stop racing in Battersea Park after 2016 was reached by legal Agreement after a Claim issued at Court by BPAG and the threat of a very risky Judicial Review compromising the July 2-3 event.

Autosport reported on Monday 23rd May:

“Autosport understands the protracted situation surrounding the fate of the double-header in Battersea Park means this July’s event will be the venue’s last.

A judicial review into Wandsworth Council’s closure of the park and the planning consent around the July 2-3 event is scheduled for Tuesday or Wednesday this week.”

According to Cllr Cook, Formula E’s decision is only due to “the possibility of a street circuit in central London, which has always been their preferred option but was not previously possible” . No doubt that the deputy leader received very secret information that only Wandsworth Council is aware of! Indeed, in a new article published today in Autosport:

“This season’s Battersea Park title decider is set to be FE’s last race at the venue and there is no immediately viable replacement for a race in the UK. […]

A London ePrix is considered crucial to FE but the series’ partners and teams are understood to have accepted the city’s absence from the 2016/17 calendar on the grounds it returns in season four.

The deputy leader still managed to present his defeat as a victory, as he claims credit for the money raised by the event:

“As a result we have secured a financial agreement with Formula E which includes a compensation package for loss of income in 2017. This means that the total amount the council will receive from Formula E for staging these racing events in the park has reached £2.85m.”

What a great politician, who just lost the war and still praises his achievement!

In any case, we learn here that – while last December the Council refused to disclose the financial agreement with Formula E (to protect commercial interests, they said) – the full deal was not the mere £200,000/year that we were told, but nearly 5 to 7 times more per year.

There is no doubt that the Council was happy enough to pocket the money and keep most of it to fund other priorities, instead of redirecting the sum to the park as they promised. Indeed the statement talked about the library services (that the Council is trying to close) and the services for vulnerable children where the Council was accused of “lack of effective scrutiny by senior leaders, elected members and managers” in Ofsted’s own words.

Read also: Difficult time for the Council as they receive a damning report

In return for certain binding promises from Formula E, BPAG agreed to stop their active campaign to disrupt or stand in the way of this year’s event and we will discourage others from doing so. They are now calling for all our supporters to respect this commitment they have given not to campaign against this year’s racing.

Following the 2016 race, the BPAG will concentrate their efforts on ensuring that the planning obligations on Formula E and the Council to achieve this are fully met.

And to conclude, nothing better than Formula E’s CEO Alejandro Agag words, as reported in the Evening Standard: “I love Battersea Park, but you’re effectively in a park and all you see is trees“. Yes, this is a park…!