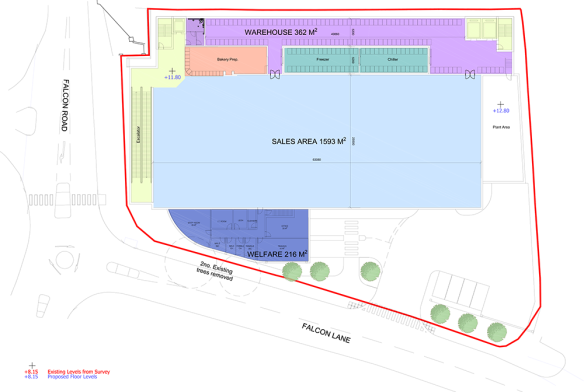 Lidl has owned the site since 1995 and made a few small changes in the past:  in 2006 they applied for an extension of the store (p.a. 2006/3463) and in October 2012 they added a small single-storey extension along the south-west elevation of the foodstore building to create ancillary warehouse space (p.a. 2012/3044).

They claim that Lidl in Clapham Junction is one of the best performing store in the UK and they even consider it as one of their flagship store. As it is often very busy with the car park full, and they wish to improve the customer experience by redeveloping and expending their supermarket.

The redevelopment proposals comprise of the following:

This will be a full change from the current layout with the front of the new building starting at the level of Falcon Road, showing up to 3 storeys from ground level from Falcon Road. One of the aim of the proposal is to bring a more active frontage on Falcon Road, where one entrance will be located, and attract more people coming from the station.

The material used for the building will consist of bricks  for some walls (trying to match the layout of the area), glazing for the main façade and Alucobound (aluminium cladding) for the metal-silver parts.

The car park capacity (currently on surface, with 70 spaces) will be doubled and inside the structure: 70 car spaces on basement and 67 on ground floor (+ 4 for staff outside). On top of the 2 levels of car park will be the store.

We were told that Lidl already responded to some comments and have improved the proposal on landscape. As they are removing 2 trees they are providing 2 mature trees and 4 smaller ones. Their proposal includes also a wider pavement on Falcon Lane. 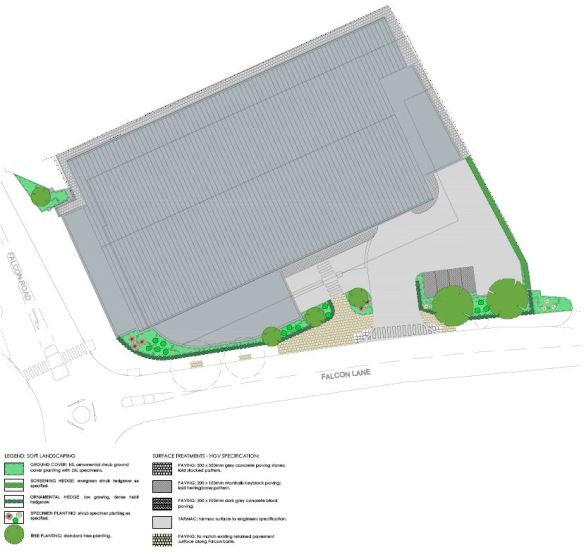 One of the main criticism concern the the car park wall along Falcon Lane. We have received some comments from local residents, for example to “increase the shielding for the car park and road on the Falcon Lane side of the car park to make it less like we are looking on to a car park“.

Beside specific considerations, this application will be seen by some residents as a relief as it does not include the usual towers cherished by Wandsworth planning officers. While major retail warehouse building have planned to be replaced by residential tower blocks (see articles HERE, THERE and HERE again), this move should also put an end to the recurrent suggestion made by Council officers that Falcon Lane should be re-aligned to allow more buildings (Site Specific Allocations Document 2014 – that CJAG has always opposed), thus shrinking the land occupied by Lidl.

Lidl claim they have notified 20,000 local residents and the ward councillors. They are planning to submit an application within the next 2 weeks but is also considering incorporating concerns from residents.

You can let them know your views and comment on the proposal on the local website (email/petition/address).

Lavender Hill for Me has published an article on the redevelopment. Along with a few comments on the entrance and the material used, they share our concern regarding the bars providing ventilation to the car park. They say:

“What could be done? One suggestion is a green wall on the lower section, which could be accommodated as the pavement is to be widened, and which could certainly help provided it’s maintained. The upper section could be redesigned to give a bit more definition and structure to the individual windows, and maybe incorporate a brick outer layer or a cladding material more akin to that on neighbouring buildings.”