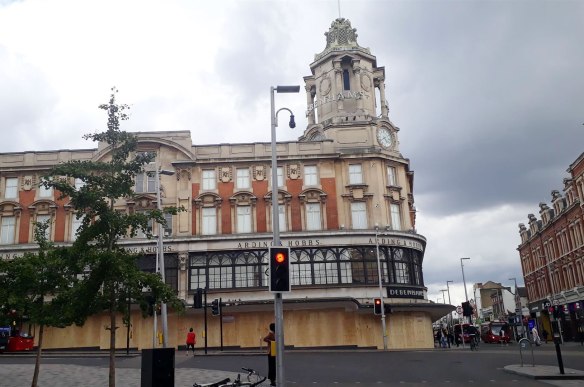 As many (most?) of you will have noticed, Debenhams is now fully disappearing from Clapham Junction. The lockdown period was surely the last nail on the coffin for the Arding & Hobbs occupancy, and the boards that are now surrounding the ground floor are announcing that the building is “looking ahead to the next chapter of its history” as the owners have put in the leaflet they distributed in the area (download the leaflet here).

The new owner of the building wanted Debenhams out for redevelopment

As we reported last October, W Real Estate, the new owner of the building (bought for circa £48 million), wanted them out so they can redevelop some or all of the property.

It all goes back to Debenhams’ CVA process (a sort of ‘voluntary bankruptcy’) last year where Debenhams asked landlords at 105 stores all over the country (including the Arding & Hobbs building) for rent cuts so they could afford to keep trading. In exchange they were given a consolation prize of being able to end the leases early if they found a better deal.

Most landlords just accepted this, but in Clapham Junction’s case, W Real Estate, which just bought the plot from British Land, found it was a great opportunity to make a quick return by selling it for redevelopment.

Unlike their unit in Southside that they just closed in April 2019, Arding & Hobbs was profitable and Debenhams wanted to keep the store in Clapham Junction. In Summer 2018 we reported on retail in Clapham Junction and wrote: “Clapham Junction’s branch is busy and definitely one of the UK’s more successful branches, and it’s notable that this branch remains well stocked, while others seem to be fading“.

Unfortunately, W Real Estate wanted them out, and decided not to renew their lease that was ending in June 2020 (now!). Debenhams was still hopeful and wrote to us at the end of October 2019, noting that they hoped to continue trading – saying:

“At this point, no exit date has been agreed and the store will remain trading until – at least – 23 June 2020. […] This store will continue to trade at least until the middle of [2020], and potentially for up to 12 months beyond that.”

However in April this year we heard that Debenhams was filing for administration after the coronavirus lockdown forced it to shut its shops across the UK. According to Debenhams’ boss Stefaan Vansteenkiste, the move aimed at protecting the business in the current uncertainty but wish to resume trading when government restrictions are lifted.

As per comments that we received, staff were informed on 6th May 2020 that they were made redundant (they should get redundancy pay only if they’ve been employed over two years).

The only good news is that so far TK Maxx has a long lease and therefore should continue to trade as part of any future investment in the building, according to the latest communication. 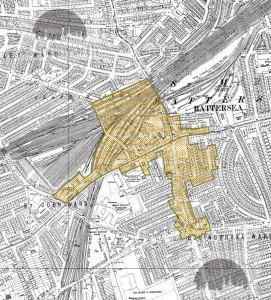 Arding & Hobbs has been around since 1885, when it was the largest department store south of the Thames, emphasising the commercial importance of the area which saw the construction of some 4,419 houses in the area between 1878 and 1898.

A fire destroyed the building in 1909, which was replaced by the current much grander structure.  And – via a few years trading as Allders, before being taken over by Debenhams – it’s been with us ever since.

There’s a lot of local affection for the store (not only the building!), and it even saw national fame in the riots of 2011, when the boards on the windows were covered with messages of support by members of the public.

Could the future of Arding & Hobbs be offices, flats or a large hotel? 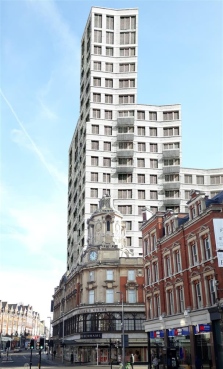 Debenhams were keen to keep trading at Clapham Junction, but it’s fair to say that other department stores aren’t exactly queuing up to take over new properties at the moment. So why did W.RE throw them out?

Their plans presumably rely on the fact that the building is worth more split into parts, than as a whole – partly because the overall rent tends to be higher for this sort of arrangement, and partly as this reduces the risk to them if any of the individual tenants can’t pay the rent.

The current plan suggests office use for the upper floors, with smaller shops on the lower levels – though previous rumours pointed towards W Real Estate wanting to convert the whole building to a hotel.

The future use of this building is very important to Clapham Junction!  Debenhams had some difficult recent years – but the underlying fact is that Debenhams is a major ‘anchor tenant’ to the area, and having a large store attracts custom from a much wider area than we see in other town centres (like Clapham High Street or Balham). We would be very concerned if we lost a large proportion of the retail space here, or if the property was converted to a use such as flats, which would be essentially irreversible and which would permanently reduce the strength of the Clapham Junction town centre.

However despite our disappointment at the way Debenhams has been treated, we do recognise that the building needs to move with the times. To maximise the value of the property (and get through planning) it may make more sense for W real estate to split  the first two floors and the basement in to three or four largeish retail units, with the corner entrance on Lavender Hill or the long-closed entrance on Ilminster Gardens leading up to offices on the more peaceful upper floors. We know several retailers are keen to find larger units at Clapham Junction – such as Boots (who currently have one unit that’s too small, and one that’s out of the way and itself slated for redevelopment), Ikea and / or Decathlon (who are on the hunt for urban sites and would probably be very happy with basement and maybe more in no time at all) and the several of the larger clothes retailers who would value double height units with the large windows on the first floor, so close to the station (H&M, for example, are notable for trading well in Putney, Wandsworth and Brixton – but not here!).

One thing we don’t need to be too concerned about is demolition of, or very major changes to the outside of, the building. Fortunately it is a Grade II listed building, which will limit the scope of the developers to demolish or hugely alter the external appearance. The building is an elegant one, and it’s in the financial interest of any developer to seek to make the most of this rather unique asset.

That said, we wouldn’t be at all surprised to see plans to add another storey to the roof level, perhaps with a second covering a much smaller area. As the aerial photo below shows – the roof is already covered with a warren of ad hoc single storey extensions and plant rooms, partly hidden by the current parapet that is half a floor high – and replacing all of these with a new floor covering the entire area of the building is likely to be feasible without the appearance of the building changing at street level.

At this stage, we suggest these principles should apply to any redevelopment:

Some cause for concern…

One disappointment is that despite having given notice to Debenhams a year ago, the developers have thrown out their current tenant, without having developed plans for what happens next. This means we’ll have a boarded up landmark building in the very centre of our town for quite some time – indeed, it’s possible that they will try to play the classic developer game by subtly holding Wandsworth planners to ransom by saying “unless you let us do what we want, it’ll stay boarded up even longer“.

W Real estate have engaged a PR agency, Cascade, to run a ‘consultation’. Cascade is not new to the area, having represented the Ram Brewery and Battersea Power Station developments, and have set up a  website for the project. This isn’t unusual in itself – as developments need to show that they have engaged with the local community if they want to get through the planning process. But the nature of the consultation can be an important guide to the intentions of the developer.

The project website seems to imply that the closure of the department store is solely Debenhams’ will, as they wrote: “Debenhams have announced that following the current public health pandemic they do not intend to reopen in Clapham Junction.” As we saw previously in this article, this is mis-representing the fact that the landlords wanted Debenhams out and did not renew their lease that was ending this month – so it’s not really been Debenhams’ decision!

They also state that “The Arding & Hobbs building was built in 1910 as one of south London’s first purpose built department stores” without mentioning Arding & Hobbs has been around much earlier as we explained above.

According to LinkedIn, W Real Estate is primarily an investment, development and asset management firm – which doesn’t quite align with their portrayal as “a team of property specialists who strive to create value in everything they do” as presented by Cascade. Compared to most of the other local developers we have engaged with over the years, they’ve been notably quiet when it comes to the detail of their intentions!

We contacted the PR agency on Monday and they told us that a hotel is unlikely. This is currently very early stage of course but they said that ideas could include keeping retail on ground and basement floors (from the current 5 floors) with the rest being dedicated to office space. They have ideas for a single storey roof extension (on their website, they talk about “sensitive additions, and we know that for developers in the borough, sensitive to 5 storeys could mean 20 storeys okay!) but are keen to retain the focal point creating by the building.

Cascade are currently inviting people to give their view and complete a small survey. As ever, with very little detail and only high level ‘obvious; questions there’s not much scope for meaningful engagement. Some questions may give the opportunity to enforce the heritage asset and the importance of the historical aspect of the building such as “Sensitive restoration of the heritage building (Very important / Important / Neutral/ Not important)“. However, some other questions are more suspicious as not exactly explaining the implications behind the wording, such as: “Enhancements to the existing building for modern usage” (which could mean wiping out the inside to improve functionalities and business needs).

However we’d nonetheless recommend completing it (link), if only to get on the mailing list should any more detailed proposals emerge. The real test will be the point when they have to go to Wandsworth with more detailed plans – and you can be sure we will be reviewing those plans in detail.

Update 22/06/2020: One of our member pointed out that it is possible to see clues of the glory of the building in The Human League’s ‘Life On Your Own’ video (from 2’08): https://www.youtube.com/watch?v=QLe8HEqdpLc

3 thoughts on “Debenhams has gone in Clapham Junction. What next?”