The change announced in April 2012 has now materialised. It confirmed the previous announcement that Peabody has selected Mount Anvil as its joint partner for the final phase. As the initial scheme was designed more than 10 years ago, it is sensible to revisit the plans in view of the experience in phase 1 and 2.

The leaflet they have distributed to present the new project is vague (as a PR exercise, the idea is for the respondent to think they have a say), but Peabody mentioned at a resident steering group early this year that the new application to Wandsworth would involve greater height to the present application. In the meantime, images present an opportunity to reduce the width of the buildings (moving them forward?).

However, they seem to have learned from their experience with phase 2 and dealing with damage made to neighbouring properties in Comyn Road as it says: “Ensure neighbouring buildings are protected“.

They are planning to submit two planning applications for Phase 3: 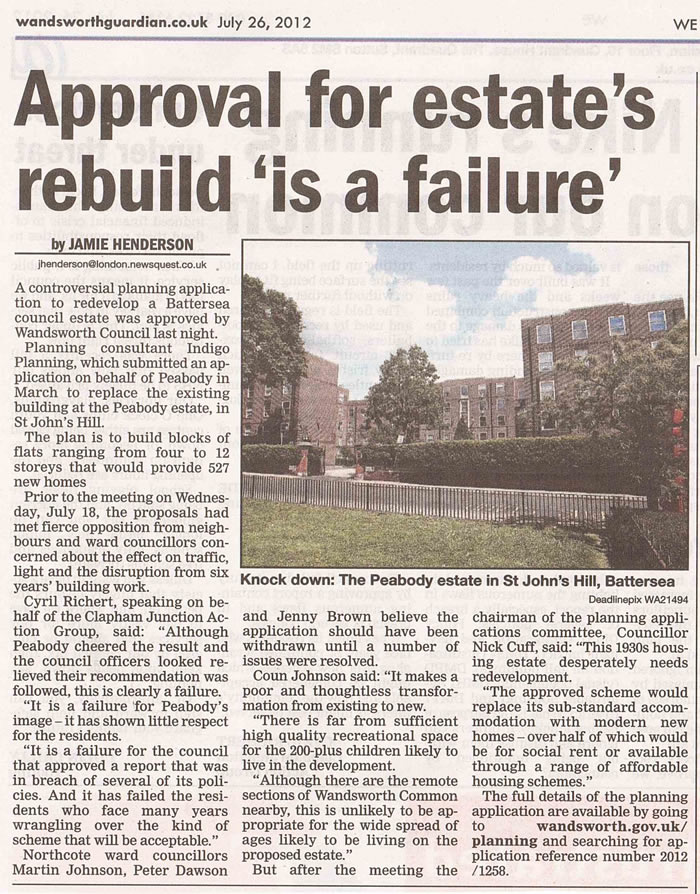 I understand the need of some PR at some extent, but why they write: “Hawkins\Brown, the architect originally chosen by the residents” is just flabbergasting. Most of the local residents will still remember that they totally opposed the original plan promoted by Peabody and designed by Hawkins\Brown, and the local Councillors presented a global objection before the Planning Application Committee at the time. SHAME, shouted the audience when it was approved in 2012!

More delay: how a 7-year project could turn out into 14 years

With the current projected timeline, submission including the redesign of the blocks might happen at the end of 2022. As this is the biggest part of the project (with frontage along St John’s Hill, it seems reasonable to expect a completion after 2025.

Peabody redevelopment in St John’s Hill was originally approved in July 2012 after a large campaign to oppose the proposal and local newspapers naming the plan “controversial”.

The original schedule was:

Phase 1 was only achieved in 2016 (already late) but then Peabody decided to put a temporary hold on the development, blaming .estimated build cost significant increase (and because units were not selling well on the private market).

In autumn 2017 they submitted an amended scheme for the remaining of the construction, with taller buildings, implying it was a condition to continue the development. They knew the Council was desperately needing social housing and the application was approved in February 2018, as we predicted.

And then… nothing for nearly 2 years! The construction site remained desperately empty as a no-man’s land! Brexit played probably a part, but risk assessment is part of good planning.

Construction work started again for phase 2 in early 2020, with a goal to complete in Spring 2022 with  final completion of phase 3 in early 2025 (i.e. 13 years after their project was approved and double the initial schedule approved).